Team Building: Setting Second Chance Hires Up for Success - The Edge from the National Association of Landscape Professionals

If you’ve been considering looking into hiring individuals with a past in substance abuse or criminal charges, you may be concerned about the drawbacks or your decision backfiring in some way.

“Giving someone a second chance is just that, a chance,” says Anne Campbell, owner/operations manager of Colorado Stoneworks Landscaping, based in Colorado Springs, Colorado. “We all fall at some time in our lives so why not offer a hand to someone that might change their life? It might just get them on their feet before moving on, but that’s a success all its own.”

For Cory Owens, COO and co-owner of Buddy’s Services, LLC, based in Calabash, North Carolina, one benefit of hiring people with a criminal record or a past of substance abuse is the ability to provide a second chance and giving them the opportunity to excel.

Campbell says these individuals often have a lot to lose and can have a hard time finding employment.

“When they find a company that will hire those with a criminal record, it can make for a very motivated and dependable employee when they learn that their employer is willing to support them regardless of their past and truly wants them to be successful,” Campbell says.

Alyssa Sprague, owner and landscape designer of 2 Lawn Guys And a Lady, based in Merced, California, says hiring individuals with this kind of background can be beneficial to both parties.

“Labor shortages are a common problem in this industry, so to discount someone who could potentially be a real asset to your company just because of their past is a real shame,” Sprague says. “A lot of time individuals in these circumstances are grateful for the opportunity to prove themselves, they may have skills and abilities that they’ve never had the chance to utilize, or they may just be ready to earn a good wage in exchange for hard work so that they can take care of their families and financial responsibilities after not being able to do so for some time.”

Some of the potential issues to be aware of are client contract requirements, securing bonds, and things not working out for various reasons.

Campbell says they’ve had situations where some with some commercial clients’ vendor agreements include requirements that there are no felons on staff. She says she will contact the client and let them know they hire felons so she cannot sign that portion of the agreement.

“I explain our policies and hiring practices so they can understand our philosophy,” Campbell says. “In some cases, we have lost the contract, but not very often. Most of the time we work out an addendum and a specific agreement that works for both parties and we’re able to continue service for them.”

For Sprague, she says she initially ran into issues securing bonds for some of these employees. Then she learned about the Department of Labor’s federal bonding program, which provides fidelity bonds for felons and other hard-to-insure employees at no cost to the employer.

Owens says one downside of hiring recovering addicts or people with a criminal record is they often need something ever-changing. There are many hires they wish they could have kept with the company longer. He says these people leave because they either decided to start making bad choices again or have moved on to another opportunity. Many people use Buddy’s Services as a stepping stone to get on their feet and invest in what they really want to do.

“If they can help us great, but more importantly, what are we doing to help them is the way I and Justin look at it,” Owens says.

The biggest difficulty for Campbell is when employees in recovery relapse. She says it’s hard to watch someone slip back into the grips of addiction.

“Chemical dependency is a very difficult thing to overcome and many people are not successful at that,” Campbell says. “If an employee is open with me about their addiction, I am happy to offer support and guidance to find support groups or professional help to continue in their sobriety.”

Deciding to give someone a second chance requires you to do your homework.

“Check references,” Sprague says. “It’s not uncommon for these individuals to list people like parole officers, sober living staff, or even their sponsor as personal or professional references. They work with ex-convicts and individuals in recovery all the time and generally have very good input.”

Campbell encourages running background checks before offering the position and doing your own research on the charges. She says by asking exploratory questions can help steer your decision.

“How a person tells a story of their past (even with previous employers) says a lot about whether or not they take responsibility for their actions,” Campbell says. “If the story basically says it was everyone else’s fault, that’s a red flag for me. A person capable of rehabilitation first must accept responsibility for their actions and accept the consequences of those actions. Their relationship with and understanding of their past can impact their success in their future.”

Owens says it’s important to put employees with a criminal or addiction background in the right environment. They strive to be mindful and not put them in vulnerable situations where it’s easy to do the wrong thing. New hires will start out riding with Owens so he can learn more about their background.

“Just listen,” Owens says. “Don’t listen to respond. That’s one thing that nobody needs is somebody to listen and respond.”

He says he and co-owner Justin Decker work to invest in all of their employees and discover their strong suits while building them up.

“We express to everybody if it isn’t edifying or educational and uplifting, then don’t talk about it,” Owens says. “We work very hard on our culture around here to continuously stay positive.”

“I also think that having a very thorough onboarding process for all new hires goes a long way and sets the stage for better performance from employees — not only with this background but across the board,” Sprague says.

Campbell says it’s also important to give it time, as a person with a criminal background or substance abuse issues may have never had someone who believed in them and supported them before. In one case, she had an employee with a criminal record who didn’t start out as the best but showed serious potential. He often called in or would try to leave work early. Campbell showed him how much he could have earned over that missed time rather than firing him.

“He was given an ultimatum at that time, but something clicked with him that day,” Campbell says. “He told me later than he had never had someone take the time to show him where he could improve and an opportunity to do so. He had never had someone believe in him the way we did. He completely changed his habits from that day forward – rarely calls in, open and honest communication, and he’s one of the hardest working guys that we have. He is now a crew lead and tells me he’s here for life.” 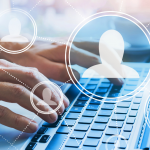