How I Do It: Core or Liquid Aeration? - The Edge from the National Association of Landscape Professionals

Home » Featured » How I Do It: Core or Liquid Aeration?

How I Do It: Core or Liquid Aeration?

It is understood that fall aeration is beneficial for lawns and helps prepare them for the following spring. However, one question that is coming up more is what type of aeration services to provide your clients.

Jack Moore, CEO of Grassperson Lawn Care & Landscape, in Lewisville, Texas, says their focus is more on core aeration because they believe it provides a better outcome, but they offer liquid aeration throughout the growing season.

Grassperson says while the margins are better on liquid aeration, their margins for core aeration are still significant. Moore says it’s much easier to complete liquid aeration, but they have a team that can easily handle both services.

Spring-Green Lawn Care in Peoria, Illinois, has started experimenting with liquid aeration products to measure performance. Meanwhile, American Turf and Tree Care, in Greeley, Colorado, has moved entirely to liquid aeration as this version eliminates a number of pain points they were experiencing with core aeration.

“When we did regular aeration, we were having to purchase and maintain mechanical aerators and fuel,” says Blair Matthews, head of sales and marketing at American Turf and Tree Care. “We had to send a team of guys in a separate truck out to push heavy machinery around people’s properties. There were, without a doubt, always a couple of broken sprinkler heads, or we damaged something operating heavy machinery. You’re having to move that aerator up and down a ramp, so somebody would almost always get hurt at some point in the season, and then you had machines sitting in the shop for 10 months out of the year not making any money. We also had to try to find two seasonal employees to do the work.”

Matthews says he was skeptical about liquid aeration before John Perry, CEO of Green County Fertilizer, educated him on the topic.

“What it does is it soaks down into the soil profile six and sometimes 12 inches deep in some cases,” Matthews says. “It opens up around the soil particles. So, you’re not going to have the instant gratification of little holes all over the yard, or the headache of that either. But this opens up the soil profile, allowing water, air and nutrients to really penetrate much deeper into the soil profile. And it’s also leaving behind a good amount of organic matter.”

Matthews says their technicians are able to kill two birds with one stone with liquid aeration. When they are doing their granular fertilizer application in the fall, they can fill their truck’s tank with the liquid aeration product and spray it on top of the lawn.

Since making the switch, American Turf and Tree Care’s labor costs have gone down. They’re also no longer having to maintain the equipment they only used for two months and the product itself is cheap.

“It makes life so much easier and customers love it,” Matthews says. “I’ve had people call us just for the liquid aeration and then I turn that into a lawn care package sale.” 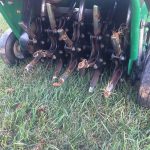 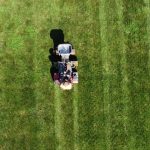 Photo: C. Caramanico & Sons Inc.
Business Smarts: Getting the Most Out of Fall Aeration