Level Up: R&R Landscaping Doesn’t Compromise on Their Identity - The Edge from the National Association of Landscape Professionals

R&R Landscaping based in Auburn, Alabama, doesn’t have an ideal company size they’re focused on reaching. Instead, they focus on their ideal client and ideal employee.

“Successfully attracting those two groups of people drives our future decisions,” says Claire Goldman, principal and head of design for R&R Landscaping. “Our intention is to steadily grow in a controlled manner by consistently attracting the best talent and maintaining high-quality results for our clients.”

Goldman defines their ideal client as someone who trusts the company completely through the creative process.

“It really doesn’t have anything to do with the budget,” she says. “It’s more that trust and that relationship is there to collaborate together. We find we give our best work and best service to someone that really gives us a little bit of creative freedom in our process.”

As for their ideal team member, Goldman says they are looking for someone with a positive attitude and an eagerness to learn.

“We’ve really been drawn to people that actually don’t have a lot of experience in our industry because we find that we have to get them to unlearn a lot of things that they’ve been taught,” she says. “Experience is not a big deal to us. It’s much more important to have enthusiasm and willingness to learn.”

Starting out, it was just Goldman, her husband Charlie and one other employee in the field. They worked all day and then Charlie would meet with clients in the evening to secure more work. Now the company employs 20 to 25 people depending on the season.

The company experienced several spurts of sudden growth when they were smaller and would take on any job offered to them. Goldman say during these periods of revenue growth it was overwhelming and they eventually burned out.

“We were exhausted from running so hard and sacrificing too much family time,” Goldman says. “We made the decision to control our growth and limit how much we take on.”

The company as a whole decided they wanted a balance between professional life and home life. They built a structure that would still bring in the numbers needed to run the company well, but not overwork anyone on the team. Refusing to compromise on that balance, Goldman says they haven’t worked a weekend in a couple of years now.

“When attracting team members, it’s a lot easier to bring in new people when you can tell them what time they’re clocking out at the end of the day and it’s not just when the sun sets,” Goldman says.

When they feel like they’re not giving their best service, Goldman says it is a red flag to them that they need to adjust that division or focus on what they are really doing well.

“As the demand for our product increased, we had to make strategic decisions to create a manageable business model that reflected who we are and the environment we desire to nurture for ourselves and our employees,” Goldman says.

She says the past few years they have still been growing but it’s been much steadier and something they were prepared for.

“We had to create a clear identity as a company and a realistic understanding of exactly what we do well and how much is too much,” Goldman says. “We actively seek to avoid overworking our team and allow a little flexibility while accommodating our client’s needs.”

Until recently, R&R Landscaping was a full-service landscape company, but as they clarified their identity, they decided to eliminate maintenance and focus on design and installation exclusively.

“Every consultant in our industry would tell you that you need maintenance,” Goldman says. “That’s your bread and butter. That’s how you’re recession-proof. We’ve always taken that seriously, but hands down, it’s just not a good fit for where we are.”

Goldman and her team use the motto of ‘You don’t go to Chick-fil-A for a cheeseburger’ to stay focused on their specialty. She says learning to say no is difficult, but they have developed relationships with other landscapers and subcontractors in town. R&R Landscaping makes referrals if they cannot faithfully take on a project.

“Everyone knows while we are a landscape company, we’re not a full-service company,” she says. “We’re specifically a design/build firm and this is what we do well and we’re going to continue doing it well and really focus on that.”

She says they have a pretty hefty emergency fund in case of market downturns. Goldman says targeting high-end residential clients has helped them but they always have their finger on the market and are willing and open to change as needed.

“We have been really fortunate to be all residential because I think a lot of the companies that have been more commercial have felt the losses more in our industry because hotels and restaurants and everything are struggling so much,” Goldman says.

The company is able to work year-round, but they slow down in the winter due to rain. Goldman says they try to be strategic in their jobs so they can work on things that are not as affected by the mud in  January and February.

Goldman credits their relationships, company culture and creativity for their business’s growth.

“At the end of the day, we are in the relationship industry,” she says. “Relationships only work when they are genuine, so it takes a fair amount of energy and time to build lasting networks with clients, subcontractors, and team members.”

She says their goal is to be the best landscape company to work for within their market area. The company’s clients know they are not a “one size fits all” design firm.

“We want to know them, understand their goals, complement the architecture of their homes, and provide custom finished products that get better over time and function well for our clients and their families,” she says.

Goldman says the biggest thing that has changed their company is when they joined a peer group three years ago.

She says the relationships she has cultivated through NALP have also helped their company.

“Every time we get a chance to network and engage with our industry on a national level, we always learn something fruitful,” Goldman says. “I’m so passionate about this industry and the people in it. The NALP is our industry’s biggest advocate, and I find it crucial to support each other and strive for excellence through education and NALP-sponsored events.”

Working with the Right People

Goldman says one of their greatest challenges with growth is having the right people in place and maintaining quality while training new team members.

“We’ve seen the consequences of having toxic people on our team, so we are very intentional about who we bring on, and we don’t compromise,” she says. “There was a time when we would hire any warm body to keep up with the work. Never again. I’d rather turn down work than have the wrong people on my team.”

She says now that they have such a solid culture it’s easy to spot those who won’t be a good fit with the company.

“When we interview, I’m talking to people, I’m not asking your traditional strengths and weaknesses questions,” Goldman says. “I’m really just trying to get to know them and understand who they are and what they’re looking for at the end of the day. We ask them to define what success means to them.”

Goldman says they have a change of the season celebration the first day of every new season. Every year the celebrations are different.

“We don’t compromise on that,” she says. “If it’s a busy day and it’s the first day of spring we’re still going to have our kickoff party.”

The company also has four different colored poker chips that represent the core values of quality, image, education and integrity. If the production manager or operations manager sees anyone representing a core value, they will receive a poker chip. These chips can be used to purchase company swag, snacks, drinks and more at the office.

“Our team is our most valuable asset,” Goldman says. “We work hard to make sure they know how appreciated they are. Clear communication, incentives, and company events are a good start to building a solid culture. However, culture ultimately comes from the top. We must lead by example and show genuine compassion to truly cultivate a deep-rooted and flourishing culture.”

Being Female in the Industry

Goldman says it’s been a learning curve as a female working in the industry.

“I think the biggest challenge is my own mindset,” she says. “It’s easy to get out there and get frustrated because there are a million times where I’m not going to be taken as seriously as if a guy was to show up on a jobsite, whether that’s with a homeowner or a builder. I had to learn to not let those things get me bitter and use them as opportunities to grow in myself and prove myself.”

She says for the most part the men in the industry have been incredibly supportive and are working hard to create more opportunities for women.

“The Women in Landscape Network has been an exciting new initiative to connect, empower, and advocate for women in the landscape industry, drive the changes needed to recruit and retain female professionals, and amplify the voices of women leaders,” Goldman says. “It’s been a lot of fun to connect with other females in our industry and collaborate to create new opportunities and hear about others’ experiences.”

Goldman was also recently named the Woman Entrepreneur of the Year for 2020, you can read more about her story here. 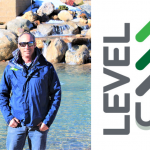 Level Up: Aridscape Utah Is Growing With a Set Goal in Mind