Faces of the Industry: Ellie and Juan Lamonaca - The Edge from the National Association of Landscape Professionals

Home » Magazine » Faces of the Industry: Ellie and Juan Lamonaca

Faces of the Industry: Ellie and Juan Lamonaca

Ellie and Juan Lamonaca, owners of Conserva Irrigation of Fort Lauderdale, Florida, never thought they’d get into the irrigation industry at first. They had always wanted to be entrepreneurs and were keeping their eyes and ears open for different franchising opportunities.

“We always thought of the green industry as a recession-proof business,” he says. “We never saw ourselves doing irrigation, but when that opportunity came, that’s the first thing that clicked and we ran with it.”

Previously, Ellie was a publicist and her husband was in construction management. She says becoming a franchisee was life-changing.

“To be honest, I was a little lucky because while I obviously had no experience in irrigation, I had a lot of knowledge about the brand and the concepts because they were my PR clients,” she says. “So, I was already very familiar with franchising in general. The PR agency I worked for specializes in franchises. So, I was very up to date on the whole franchise world, the life of a franchisee, and then on the Conserva side, I became knowledgeable on irrigation. In some ways, it was a bit of a seamless transition because I already knew a lot that many other brand-new franchisees don’t.”

She does say there was a learning curve from working in corporate America to being a business owner as well as learning how to work with her husband. On Juan’s side, he says while he didn’t have any irrigation experience before, it’s been a smooth transition for him thanks to his background in construction management and the similarities there.

“The focus on water conservation, environmentally friendly products and the way we do things was a whole new world to myself, but overall the transition from construction management to owning my own business with my wife was very similar,” he says.

They opened their franchise in April 2018 and experienced tremendous growth. Juan credits their growth to their amazing team and Conserva’s overall support. Business spiked particularly during COVID-19 and Juan believes it is driven by people being at home and investing in their properties.

Now the couple operates three territories covering South Florida’s Broward County and parts of Palm Beach, Florida. They plan to continue to expand if the right opportunities present themselves.

The Lamonacas’ mentors include Conserva’s coaches who have 30-40 years of experience in the irrigation industry and manufacturers like Toro and Hunter.

“Our biggest mentors are the other franchisees,” Ellie says. “All of these guys and women are always accessible.”

Juan says his favorite part about working in the industry is being able to educate their customers on how their irrigation system can run more efficiently and save water.

“Obviously, we all go into business to make money, but it’s very special when you’re in a business where you’re also doing something to create a change for our environment,” he says. “Being able to do things that will help sustain our environment longer is our favorite part.”

The Lamonacas say the labor shortage is their biggest challenge but Conserva has launched a boot camp that helps train promising candidates.

“It’s a great tool for the franchisees because if you have someone that you think would be a great fit, but they don’t have the experience, you can pay to send them to this boot camp, and then you’re essentially getting a great Conserva trained technician who’s ready to work for you,” Ellie says.

In the next five years, the couple hopes to see themselves with a great team and continuing to grow.

“We would like to continue to provide more work for our guys and continue to feed more families,” he says. “The way Conserva’s growing right now as a whole has been an awesome ride and it’s been great to see how year over year we just continue to add more and more operators. We want to see that continue to keep growing.”

As for what they’d like to change in the industry, Juan says he wants to see more irrigation companies be more water conscious, innovative and continue to push the envelope with water conservation.

This article was published in the July/August issue of the magazine. To read more stories from The Landscape Professional magazine, click here to subscribe to the digital edition. 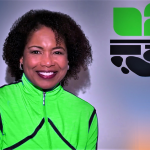 Faces of the Industry: Jina Rockwell