Changing the Game: Creating Efficient Headquarter Layouts - The Edge from the National Association of Landscape Professionals

If your landscape company is growing, you’ve probably had to discuss whether you’ve outgrown your current location or not. While in some cases you can squeeze some more time out of your present headquarters with better organization, you probably will need a new facility at some point. When that time comes, this is a golden opportunity to improve upon your company’s current workflow and eliminate some headaches you dealt with at your old location.

When to Move Locations

Chase Coates, owner of Outback Landscape, based in Idaho Falls, Idaho, says if your lost efficiency outweighs the upgrade cost, then it’s probably time to invest in a new headquarters.

“Say you’re burning up $5,000 a week in being inefficient and you’re rolling out 150 or 200 employees,” Coates says. “It would make total sense to move into a new facility and recoup that money if you can get them out the door faster and have more room and be more efficient.”

He says they decided to move to their new location because their previous office was a 20-minute drive away from their yard. Aside from wanting everything in one location, Coates also wanted more storage space.

In Portland, Maine-based Seabreeze Property Services’ case, the company was growing rapidly and their previous facility was 25 percent of the acreage of their current lot. Their new setup features most of their storage external to the building.

“We credit a lot of the 50 percent reduction in unproductive (time) as a percentage of revenue to our new setup,” says Josh Flynn, CEO of Seabreeze. “We’ve been able to bring the resources closer to our employees and refine systems and processes for moving through the yard and getting to the job site. Everyone knows where their things go and who parks where and it’s more streamlined and easier for new employees to understand. It also allows us to understand what resources we have and don’t have because everything is much easier to find and inventory.”

Similarly, Troy Clogg, owner of Troy Clogg Landscape Associates, LLC, based in Wixom, Michigan, says they moved to their new facility for more room. He says from a revenue perspective, they could double or triple without having to move to a new facility now.

Justin O’Connor, owner of Growing Seasons Landscapes (GSL), based in Cuddy, Pennsylvania, is in the middle of transitioning to a new headquarters. Their main driver was a desire to own their facility instead of leasing. His company has a couple of businesses running out of the same location so he is looking to create a separate office, storage and garage space for each of the companies.

“We’re trying to create a space that is separate but still creates a sense of all being somewhat close together and to promote communication within each company,” O’Connor says.

O’Connor encourages giving yourself plenty of time to identify a property well before you actually need the building. He says finding a property that provides company visibility but has industrial zoning was challenging.

“The process of moving, developing and finding a new location takes a lot longer than you think sometimes,” O’Connor says. “We are actually two years into the process right now. So the biggest piece of advice I would give is start the process early.”

Aside from gaining the necessary space for your growing business, creating a new company headquarters is the chance to create a custom and welcoming environment for your employees.

Coming from the field, Clogg believes the people who perform the work are the most important part of the building. He wanted them to feel comfortable being able to go anywhere in the building, even if they’re dirty or muddy, so one of his goals was to make it an inviting and enjoyable space.

“It’s incredibly durable, which is the point,” Clogg says. “We’re a bunch of men and women with muddy boots. You can’t have drywall walls. You can, but then you can’t let the people who actually do the work into the offices, which is totally against the grain for me.”

He says the way he designed the office requires very little maintenance regarding painting or recarpeting. Meanwhile, Coates says his building has been effective at recruiting new employees.

“When we first started thinking about building this building, I wanted to make a place where people felt like they were coming somewhere professional,” Coates says. “Instead of a shop behind a house, I wanted them to feel like it was a place they could bring clients and not feel embarrassed like we do this as a side business or a hobby.”

Coates says he’s also used his new building to serve as advertising. Since they are located on one of the busiest roads in town, he put a big company sign on the building that matches the branding of their trucks and website. He says they have tripled in size since moving in February of 2019.

“My thought process behind that was even if you overspend on the building,” Coates says. “People spend $1,200-$1,500 a month on billboards all the time, which don’t do anything. So I figured I may as well put it into something that’s real estate, an actual asset, and just consider that maybe 25 percent of your mortgage on the building is going towards marketing.”

While GSL’s facility is not complete, O’Connor says he is looking forward to increased productivity in the morning and being able to modify the space to suit their needs, unlike a leased property.

Both Coates and Clogg have also used their new headquarters as a space to highlight their landscaping work to clients.

The main drawbacks to moving to a new headquarters are it is a costly investment and poor planning can leave you with a wish list of things you failed to implement.

“I would say think through the workflow of your morning rollout and what type of company you are, as you’re designing it,” Coates says. “Make sure that you’re designing it to be as efficient as you can for whatever thing that you do. There’s nothing more annoying than building something and then having a whole bunch of things you want to change.”

A major element to consider when seeking your future headquarters property is the size of the lot and facility. Clogg says it’s important to know what you need both now and what you’ll need in the future from the space.

“It’s not always easily done because so many of us when we start are on a shoestring but the more you can plan for the future, the better,” Clogg says.

“Understand how much more difficult it will be to do again if you don’t make big enough changes now,” Flynn says. “If you’re making capacity and room for 20 percent growth in the next two years, make the actual adjustments for 50 percent because it’s just that much tougher to revamp the whole thing again in a short period of time.”

Coates says in their case they built the building for a $5 to $7 million company, and they beat that in 24 months after moving in. He also advises planning 25 percent of your building cost for extras, as over the course of 18 months they spent another $25,000 outfitting the building with tools and supplies.

Also when planning for future growth, don’t overlook the space needed for employee parking. Coates and O’Connor say they have both found this a challenge. Coates says you should also consider the logistics of your new location. He looked at where all their vendors and suppliers are located, so they are close enough for free deliveries.

“One thing we really considered was drive time from where our clients are and where our shop is,” O’Connor says. “The cost difference of what a couple miles can make over the course of a year with windshield time with employees.”

Talk to department heads and your in-house mechanics when deciding the layout of your yard and office space. They can help you determine how the new facility will be used, what needs to change and what can be done better. Coates says he asked his team what top five things they wanted fixed to make sure they weren’t recreating the same problems at the new location.

Clogg says he designed the headquarters a lot like how he designs outdoor living spaces. He knew all the furniture sizes and the traffic flow of where he wanted people to come and go.

“If you are already a designer in any way or build and design outdoor spaces for people, I think it’s the same process should be applied inside,” Clogg says.

Flynn says due to moving into their facility in July of 2020, a lot of their new workflow was created to minimize the amount of movement in and out of the building to prepare for the day. It has reduced unproductive load-out time.

“The exterior of the building is set up so that each division of the company has their own parking areas and storage containers making the number of steps and movement required to get ready in the morning a bare minimum,” Flynn says. “We also have a fully covered gas and diesel station that has keypad operation, making it feel as though our own gas station on campus.”

This article was published in the Sept/Oct issue of the magazine. To read more stories from The Edge magazine, click here to subscribe to the digital edition. 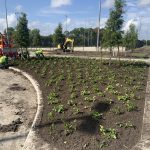