Level Up: emi Landscape Operates With a Fanatical Attention to Detail - National Association of Landscape Professionals

Home » Featured » Level Up: emi Landscape Operates With a Fanatical Attention to Detail

Level Up: emi Landscape Operates With a Fanatical Attention to Detail

When emi Landscape was started in 1983, it was out of necessity. Founder Ed Wigfield had been laid off from his construction job and had just built his own house.

Since then the company has grown and moved from the residential market to purely commercial work. Based in Macungie, Pennsylvania, they are a full-service commercial industrial landscape maintenance and snow removal company with a current annual revenue of $7 million. They experienced 30 percent growth this year.

Bob Marks, Wigfield’s stepson, recently bought the company in January and grew up in the business. He says their 10-year goal is to reach $15 million in revenue. He says they want to be big enough to keep providing opportunities to the people within the company.

“We don’t care about being the biggest,” Marks says. “We talk about our reason for being. Why does emi exist and it’s not to cut grass or plow snow, it’s to build relationships through trust and integrity.”

“We try to be picky,” Marks says. “We believe we’re not for everybody. We’re not going to be the low bid. We talk a lot internally that our ideal client wants to have a partnership. We’re not just the vendor that you bid out every year and if you’re the lowest number you get it. We believe what we do provides benefits.”

Marks says they strive to get three-year contracts with their clients because they view the relationships as true partnerships.

“When we come into a new site, if it’s been neglected, if we get that three- to five-year contract we’re willing to put in that extra work upfront,” Marks says. “When there haven’t been good edges on tree rings, we’ll spend that time. If we need to do an extra application of lawn care the first year to get it taken care of, we’ll go that extra mile. So that instant impact happens, knowing that the first year may not be super profitable but we’re going to be there for a while. They see the results and then at the same time they’re willing to buy a little bit extra if they see the results of what we’re doing.”

The majority of their business comes from their commercial maintenance packages that cover everything such as edging, mulching, fertilizing, mowing, pruning and bed maintenance. Around 85-90 percent of their maintenance clients use emi for their snow removal as well. Around 30 percent of their business comes from their landscape improvements such as tree removal and redoing flower beds around company signs.

“If an industrial site needs landscaping service, we’ve got it handled,” Marks says.

One of the company’s core values and key differentiators is their fanatical attention to detail. An example of just what they define as fanatical is when their horticulture team leader once picked 200 cigarette butts out of the grass at a building entrance.

Unlike other companies, emi has separate teams that go to the jobsite. They carry out specific tasks, such as the mowing team, the bed maintenance team, the pruning team, and the enhancement team. This also allows them to get multiple eyes on the site per week.

“We have all these different teams looking for specific things and there’s a lot of overlap,” Marks says. “Every team should look for leaves building up in the corners of parking lots and stuff like that. Weeds by the front door, it’s everybody’s job.”

This fanatical attention to detail comes from Marks’s mother, who is the CFO of the company. When she was out in the field, she would handle all their perennial maintenance and since then it has been instilled in the company. When their client Mack Trucks hosted President Biden in late July, their maintenance teams were able to shine by ensuring their property looked perfect. Marks says their extra efforts are their marketing and advertising.

Another differentiator of emi is their people first mindset. This includes everyone from clients to employees and vendors to subcontractors. Marks says they often pay their vendors and snow subcontractors faster than they get paid. While property managers of industrial sites may change, many often know of emi from others in the industry.

The third differentiator is doing what they say they are going to do. Marks says they take care of their clients without making excuses.

“We feel our competitors maybe be able to do one or two of those things but not all three,” he says.

Another key to emi’s success is the geography of their location, as the buildings are close together allowing their work to speak for itself. When Wigfield selected the company’s location, he picked an area that would grow around them, and Marks says as a result opportunities ended up being built around them.

Marks says his NALP membership opened his eyes to other ways to run the business, as he got all his training growing up in the company.

“I used to think we’re doing everything perfectly,” Marks says. “It’s one of the things that the more you know, the more you realize you don’t know. So, I think it’s really good to see the way other people did things.”

He says they take advantage of networking and learning from others and NALP’s Safe Company program. They do a 10-minute safety presentation out of NALP’s safety handbook every Monday morning.

“One thing that I thought really helped me was sitting at the awards dinner, and not winning an award,” Marks says. “We’re commercial maintenance, we’re not doing some of these amazing installs but seeing what’s out there we’ve come back with, ‘Wow, our field, our industry and our profession is pretty cool. We can do a lot of cool things.’”

Marks says their branding has also helped with their growth. All their crews are always in uniform and drive well-branded trucks and operate new equipment. This makes them very visible in their market as some days they have 25 trucks on the road.

emi employs around 30 people on staff. They don’t use the H-2B program, or a lot of seasonal help since they need their employees for the snow season as well.

Marks says like for most other companies, recruiting is tough. However, he says their employee referrals have been the most effective. They recently upped their referral bonus to $1,000 total. They receive $150 after working two weeks, $250 after 90 days and $600 after six months.

“We look at the long-term side so if someone’s going to be here six months, they get a big bonus for that because we feel anybody who’s here for six months, they know we’re a little bit crazy with our fanatical attention to detail and our efficiency and they fit that way,” Marks says.

Marks says despite recruiting being a challenge, they do turn down a lot of applicants. He says he doesn’t try to scare applicants, but he does let them know they are a little different. While they want to give a lot back to their employees, they do expect them to work hard and be efficient.

“I can tell someone who we are and try to give them the out, that if that’s not for you that’s not wrong, it’s just different,” Marks says. “So, we try to be very upfront so that either people say, ‘Never mind.’ Or we know within a week that this person doesn’t fit our culture and they get out pretty quickly.”

By being upfront about their expectations, they still have the no-shows on the first day, but they have fewer of the no-shows after a couple of days.

“We lost some time interviewing, a little bit of time on pre-onboarding, but we’re not spending those first days that are so intensive of onboarding – training, uniforms, all that stuff – we’ve avoided that a little bit more,” Marks says.

As for their retention, emi retains their employees well and has a core of 20-25 long-term employees. Marks says being picky about who they hire is part of the reason why their retention is so strong.

“We will lose some money to take care of our people,” Marks says. “We need to stay in business and our guys understand that we have to make some money to do all these things. I always lean on the side of giving more to our team when they deserve it than trying to keep it.”

As the company has grown, Marks says he’s worked hard to maintain the family business feel as one of their core values is ‘build and maintain lasting relationships.’ He talks to the company every Monday morning at 6:30 a.m. about their core values, the company’s successes, who did something great and what team is excelling.

“We know how hard our employees have to work to get this done so we work very hard to make our employees feel valued,” Marks says.

The cookouts help build that camaraderie and that family atmosphere.

“Feeding 35 people every two weeks is not free but the value I think people get out of is worth it,” Marks says. 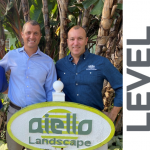 (From left to right) Tommy Aiello, Dan Crisafulli, and Pete Benedict
Level Up: Aiello Landscape Promotes Professionalism and Knowledge in Their Employees 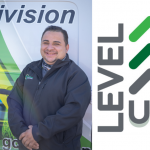 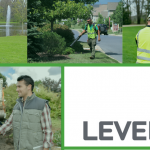