Lawn Care: What’s Discoloring the Grass? - The Edge from the National Association of Landscape Professionals

If you’re getting calls from customers complaining about why their grass isn’t green, there are a number of possible causes behind this.

It’s critical to take your time identifying the true issue as you don’t want to make the matter worse, when trying to remedy the issue.

When certain nutrients are lacking in the soil or are unable to be taken up by the roots, this can result yellow spots or an entire lawn being pale green or yellow.

In the case of an iron deficiency, a higher soil pH or too much phosphorus in the soil could be preventing the roots from accessing the available iron. Granular sulfur can help bring down the soil pH.

If the lawn is lacking nitrogen, this could be caused by heavy rains washing away nitrogen. This issue can be remedied with a nitrogen-heavy fertilizer.

Another common cause of a discolored lawn that should not be overlooked is drought or underwatering. Lawns impacted by drought tend to have a dull gray appearance or a thin, weak appearance. Large brown spots can also appear and it can be easy to misdiagnose this as a fungal infection or insect infestation.

Check for insects like grubs and if the conditions needed for a fungus to thrive are present. If neither are there, it is more likely the lawn is experiencing drought stress. As the grass goes dormant this helps it conserve water and survive a drought.

If your client’s lawn has already gone dormant during a drought, advise them to water once every two weeks with a one-half inch of water. It won’t cause the turf to green back up, but increases its chance of long-term survival during long dry spells.

The lawn can also go dormant if it is facing a cold climate. Depending on the species of turfgrass, what color they turn and what temperature will cause them to go dormant varies. If you have clients new to the area you may need to communicate to them to expect their warm-season turf to go dormant over the winter. The tips of the grass blades for the Classic and Bitterblue St. Augustine varieties turn a dark purple as reaction to cold weather stress.

There are a number of different fungi that can cause the lawn to turn different colors, but two common pathogens are rust and brown patch.

As the name implies, rust can create a reddish-orange tint in the lawn from their fungal spores. Rust thrives in dry soils and high humidity conditions. Rust typically develops later in the summer and in early fall when cool-season lawns are growing very slowly. Kentucky bluegrass and perennial ryegrass are the most common types of turfgrass affected by rust.

Thankfully, rust is mostly a cosmetic issue with lawns fungicides are not necessary. It is better to apply fertilizer to stimulate new growth and mow off the damaged blades. To prevent rust, avoid irrigating in the evening and practice aeration as it is more common in compacted soils.

Meanwhile, brown patch appears with circular patches of brown grass, but it varies greatly depending on the type of grass and soil conditions. Hot humid conditions are ideal for brown patch. Brown patch impacts cool-season grasses and is especially harmful to ryegrass and tall fescue.

Avoid prolonged leaf wetness and excessive fertilization with nitrogen. Fungicides can be used on a preventative or curative basis for brown patch. 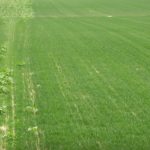