How I Do It: Operating Drones In-House or Subcontracting - National Association of Landscape Professionals

Home » Featured » How I Do It: Operating Drones In-House or Subcontracting

How I Do It: Operating Drones In-House or Subcontracting

Drone technology is ripe for adoption in the green industry. If you’re considering the aspects of implementing a drone program, check out the options below on operating them in-house, or subbing out the work.

If you decide to operate the drones in-house, here are some of the elements you need to take into account.

“Many people think you’re just buying a drone and starting to fly it, but in reality, there is a lot of preparation, research and development time to integrate drone usage effectively into your existing operations,” says Graham Pellettieri, technology director and project manager for Pellettieri Associates, Inc., based in Warner, New Hampshire.

While the size and extent of your drone program will vary, there are a number of expenses to consider. This includes buying the drone itself, which can cost anywhere from several hundred to tens of thousands of dollars. Other costs are testing fees for the pilot(s), registration fees with the FAA, and a drone insurance policy.

Pellettieri says the third-party software for post-processing is a sizable expense and you may also need some computer equipment to use it, such as additional cloud storage for all the data you collect.

“Managing the data in a way that gets the most value from the drone is actually the bigger task, and it’s rarely included in the early back-of-the-napkin estimates,” says Jeff Brooks, COO of Mapware. “Data processing, storage, and access can be done in-house as well, but the costs for this are significant. An off-the-shelf drone might seem cheap, but an off-the-shelf blade server? Not so much. And that’s before we even talk about making sure that data is secure.”

Brooks advises companies to look at outside vendors for data processing and management, even those with internal drone-data collection programs.

“A company that specializes in the software side of drone data management can help you get the security, speed, reliability, and convenience that you’re looking for at a lower cost than an internal program,” Brooks says.

Additional accessories such as extra batteries, hard cases, lens filters and more can also add up.

“We spent over $100 on extra propellers today for our drones, so there can be ongoing maintenance costs too!” Pellettieri says.

There is also the time investment of training and educating your Pilot and Visual Observer. Despite these investments, Pellettieri says they decided to operate their drones in-house because of his professional background in technology and passion for using tech tools in their work.

“I could see reasons why smaller companies may prefer to sub out drone work though, because it does take a fair amount of investment to launch a drone program in-house, especially in a landscaping company,” he says.

If operating drones in-house seems a little too daunting or expensive for your company, there is also the option of subcontracting the work out.

“I’d encourage companies to think of a scalable drone program as a major IT undertaking – often there are more systems and business processes impacted by a drone program than are immediately obvious,” Brooks says. “It’s a huge value add for the companies we see do it but doing it in-house with limited experience in the technologies is really tough, which is why I usually recommend starting with subcontractors to learn the ropes.”

The cost of subcontracting a drone pilot depends on the job requirements. The project’s location, timing, overall size, along with the type of data you’re trying to collect and the complexity of what you want to do with it will all impact the price.

Brooks says most subcontractors will do one-off projects, but most are looking for repeatable work. He adds that most skilled contractors are unlikely to do unpaid “proof of concept” work that isn’t related to obtaining a major contract.

“Those subcontractors who accept are generally very new, so they’re necessarily a higher-risk vendor,” Brooks says.

Most subcontracting drone data collectors work with their own equipment.

“Depending on your subcontractor’s pricing models, they’re likely to provide equipment options that impact their cost – if you’re choosing something more exotic, such as a drone with a LIDAR sensor, smart contractors will confirm that the pilot and the sensor operator are used to the air frame and each other,” Brooks says. “Communication on a drone team in the field can be the difference between a happy customer and a total bust of an operation.” 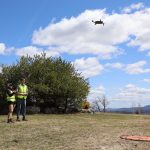 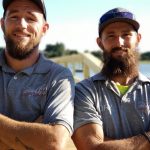 (From left to right) Owner Justin Decker and COO Corey Owens work hard to invest in their employees and customers.
Photo: Buddy's Services, LLC
How I Do It: Buddy’s Services LLC Invests In People