How I Do It: Creating an Engaging Safety Culture  - The Edge from the National Association of Landscape Professionals

Home » Featured » How I Do It: Creating an Engaging Safety Culture

How I Do It: Creating an Engaging Safety Culture

Monarch Landscape Management, based in Houston, Texas, sends out 180 employees into the field every day. Because their staff is their biggest asset, Monarch works hard to keep their team members safe.

Every year Monarch looks at the company as a whole and chooses an initiative they want to take to the next level. Several years ago, Jason Mathers, founder and owner, made safety their new focus.

Since starting that initiative, Monarch has joined NALP’s Safe Company Program, which provides exclusive benefits such as the Safety Tailgate Training Manual in English and Spanish and access to a free safety advisor.

They also started entering in the Safety Recognition Awards, which allows them to benchmark their safety performance. Last year they earned a Silver Overall Safety Achievement and an award for No Days Away from Work.

“It’s just another level of reinforcement and recognition from a national level of the efforts that are being put in because it is an investment on behalf of the company,” says Jodi Joseph, an account manager for Monarch.

As for how Monarch cultivates a culture of safety, they have a number of safety programs and initiatives in place.

Every Thursday at 6:30 a.m. they will gather the entire team in the yard and cover a different safety topic each week. Joseph says they utilize a lot of NALP’s tailgate talks to create a schedule of the topics throughout the year. They also incorporate the annually required topics for the industry as seasonally appropriate.

At the end of the safety meeting, there are three true or false questions.

“We were having a little bit of trouble engaging the guys and making sure that they were listening,” Joseph says. “There’s a lot of talking and stuff going on.”

To engage their staff more, last year they would kick a soccer ball to someone in the circle and that person would have to answer one of the true or false questions. Later on, if the employee got the question right Monarch would award them with gift cards to restaurants they knew the staff liked.

Now this year, they took the money they were investing in gift cards ($1,500) and put them to use with a bag full of poker chips. The chips have varying dollar amounts on them from $5 to $100, and only five of the chips have $100 on them. If an employee gets the safety question right, they can draw for a chip.

“We started doing that and boy did that get their attention, especially when on the first week that we did it somebody pulled $100 straight away,” Joseph says. “Try to do things like that, that are fun and engaging and really get them to listen and buy-in because now they’re diving for the soccer ball as opposed to letting it run under trucks.”

Monarch also rewards their staff with prizes by 90-day increments the longer they go without accidents. These rewards include Oakley-style safety glasses, t-shirts, baseball caps, coffee cups, a hoodie and even PTO.

“If we get to that point where we haven’t had an accident, then we’ll be able to afford to give away these things as a reward,” Joseph says.

Another program Monarch is introducing is the usage of safety cards themed after soccer. Their system features green, yellow, orange and red cards.

Each card has certain criteria. Green cards are awarded for good safety practices such as reporting an unsafe situation that could have caused an accident or exhibiting safety leadership behaviors.

Yellow cards are for offenses like participating in horseplay, not having a first aid kit in their truck or not maintaining cab cleanliness. Orange cards are for more serious offenses like not wearing PPE, not securing equipment properly, using cell phones while driving or damaging customer property. Employees who receive an orange card are written up.

Red cards are for automobile accidents, not reporting damages of any kind, lying or being the accomplice to a lie, theft or negligence. Red cards result in disciplinary action and a meeting with the branch manager.

Joseph says that they will refresh their safety program annually to keep their staff interested.

“Make it engaging,” Joseph says. “Make it fun. Make it something that isn’t a burden to them to stand out and listen to every week. Make it a reason that they get excited about it because then that makes them remember it and think about it and soak it in.”

Joseph says they have a culture of safety by making sure it is something that is seen, heard and talked about all the time, not just when an accident happens.

Monarch’s safety slogan is “How we keep the butterflies safe” and it is often on the apparel rewarded for safe behavior. Safety-related content is posted everywhere in the office as well. When accidents do occur, the company will document it and post it on their safety board so others can see how it occurred and avoid doing the same thing.

An ongoing initiative they are currently doing is the staff is encouraged to bring in pictures of their family so they can create a collage that will be viewed at the main entrance and the back patio where everyone is dispatched.

“This is just a constant reminder of why we work and why we work safely so that we can go home at the end of the day to our friends and family and loved ones in the same condition we came to work that morning,” Joseph says.

Monarch is also proactive with their safety topics. For instance, they know poison ivy is a problem in their area in May, so they start talking about it in April. That way their staff is well aware of what it looks like, how to avoid it and how to treat it before it becomes a problem.

They also train at all levels. On April 1, they will have an all-day safety rodeo that has eight different stations. Teams of people will present a 25-minute topic at each station. Topics include first aid, truck and trailer safety, mower safety, string trimmer and edger safety, blower and trimmer safety, pruning and efficiencies, HR and Aspire, and plant health care. At the end of the rodeo, they will have a fish fry to have camaraderie as a team and a family.

“That’s an investment on behalf of the company too because everybody gets paid for the day to be here to do that,” Joseph says.

Last year after winning NALP Safety Recognition awards, they hosted a party, brought in conchas and celebrated their achievement.

Also don’t miss the chance for your company to be recognized for your commitment to safety! Enter for the Safety Recognition Awards by May 2, 2022. 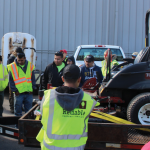 Photo: Aspen Grove Landscape Companies
How I Do It: Maintaining a Safety Culture Across the Country