Design Challenge: Adding Green to a Downtown Area - The Edge from the National Association of Landscape Professionals 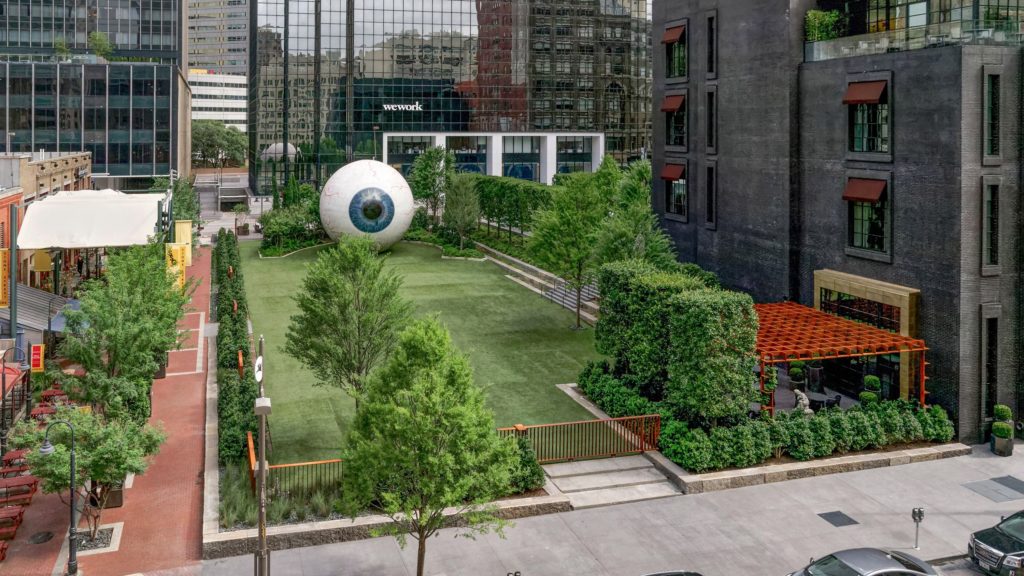 By: Sheryl S. Jackson
Photos Courtesy of James Wilson
Southern Botanical is a 2017 Grand Award winner of the NALP Awards of Excellence

When the owner of Tasset Eye Park – a private park in downtown Dallas – wanted a facelift and design for the site that would connect it to the new Forty Five Ten building that was under construction adjacent to the park, they called on Southern Botanical. The new building was to house a high-end retail store along with a rooftop restaurant and bar, so the park would serve as a backdrop for the luxury shopping experience that the owner wants to provide. The owner also wanted the park to serve as an upscale event venue that is suitable for private events such as designer showcases and weddings.

The owner tested the value of the park as a wedding site during construction – requiring Southern Botanical to stop construction and set up temporary landscaping to accommodate his daughter’s elegant wedding.

“We received a temporary certificate of occupancy for the wedding day after preparing the site for the event,” explains Anemarie Dunn, project manager for Southern Botanical. “The stairs between the park and the building were not yet poured, so we had to backfill the excavation and place mulch and plants that were still in their containers into the dirt so that the space looked finished,” she explains. Other temporary changes included synthetic turf and gravel to create a safe and attractive space for the event. As soon as the wedding was over, crews had to re-excavate the area for the stairs, remove the temporary plants, turf and gravel, and resume construction.

Although the wedding in the middle of a construction site was a first for Southern Botanical, it was not the only challenge, says Deven Tenney, chief operating officer at the firm. Working in the middle of downtown Dallas in a small space with heavy traffic on the streets surrounding the site and multiple trades on site at the same time required careful planning for crews and delivery of materials and equipment, he says.

“The streets were not available to us to load and unload next to the site except on off hours on Saturday and after 8 p.m. on weekdays,” says Dunn. “We had a large crane to move large trees onto the site that could only be used on Saturday morning when we had permission for a one-time closure of the street.”

One technology that made it possible to plant trees in the courtyard of the park, which is used as a valet area for Forty Five Ten, and know that the trees would survive was Silva Cell. “We’ve used Silva Cell in a few projects before, but this was our most extensive use of the product,” says Dunn. Between the park reconstruction and the landscaping on the new building’s property – which tied the two sites together – eight 8” caliper elms and 19 7” caliper pleached live oaks were installed. Not counting the sidewalks and building footprint, the project totaled 30,000 square feet and cost $758,000.

Installation of the Silva Cell did not go exactly as planned throughout the site, admits Dunn. “Not all the underground utilities were well documented, so we discovered a giant utility vault in the area of one of our main Silva Cell installation areas,” she explains. “We worked with the manufacturer to find an alternate installation method, and we installed the Silva Cell vertically rather than horizontally.” Although the Silva Cell area is diminished from original plans, it is enough to support the tree’s growth, she adds.

“We are seeing a growing trend in the use of Silva Cell, especially as more trees and hardscaping are added to downtown urban areas,” says Dunn. “It enables more flexibility in urban design because you can use trees and large plants that need room for root growth without disturbing pavement around the trees.”

“Because we are responsible for maintaining the site, we also installed remote moisture meters that are placed one to two feet below the pavers around the trees,” says Tenney.  Use of this technology makes it possible to monitor conditions that affect the health of the tree, he adds.

There were a number of unique materials and design features in the project. “The pleached live oaks were new to us,” says Dunn. There was no room for error in their installation, she points out. “The nursery only had one additional tree in addition to the number we needed.”

Flatsawn teak that measured 4” by 6” was used for metal and wood custom benches on the site. “We discovered that our saws could not cut the teak, so we had to find a saw that could,” says Dunn. A subcontractor fabricated the steel components, but the carpentry was handled by Southern Botanical onsite.

“The project definitely tested and shaped our planning skills,” says Tenney. “Working with different trades onsite at the same time, managing delivery restrictions and solving unforeseen problems gave us experience that we can apply to other complex projects.”

Projects of this size and complexity don’t come along every day, but Tenney is glad that his company was able to participate. “It was a neat project, and we like to see more green in downtown areas,” he says. “It was a very rewarding to be involved with this project.”

This article was originally published in the May/June edition of The Landscape Professional.