What Newsom’s New Law Means for the Landscape Industry

This legislation is part of the state’s attempt to reduce its greenhouse gas emissions. California also has a goal to mandate that 100 percent of in-state sales of new passenger cars and trucks are zero-emission by 2035.

In March 2021, the California Air and Resources Board (CARB) released an updated proposal that would move the date of the ban of the sale of all new SORE from 2026 to 2024. Subsequently, NALP submitted a request to meet with CARB and we formed a consortium of industry operations experts to provide information about how the equipment is used by commercial landscape companies.

Landscape professionals are committed stewards of the environment and work every day to care for green spaces that sequester carbon and produce oxygen among many other benefits. The primary issue with the impending regulation is the failure to acknowledge the differences between commercial and residential uses and take into account the fact that commercial zero-emission equipment is currently not yet comparable to gas-powered SORE because of:

NALP has attempted to work with the bill sponsor to amend the implementation timeline to 2026 for commercial applications. The bill was amended due to NALP’s efforts to include language that will require CARB to further consider the differences between residential and commercial uses but the timeline will remain up to CARB’s discretion.

“We support a responsible transition to this equipment when the equipment is ready,” says Andrew Bray, VP of government relations for NALP. “Currently, the equipment has performance issues, cost issues, and infrastructure issues.”

While NALP was lobbying for a more realistic timeline for commercial operators that wouldn’t disadvantage businesses, efforts were also underway to ensure adequate funding was made available for rebate programs and tax credits to ease the transition.

“Unfortunately the legislature only appropriated $30 million for rebate programs, which would account for about $15 per piece of equipment for professionals, and that doesn’t even account for residential equipment which accounts for 85 percent of all the equipment in circulation today,” Bray added, “It’s extremely disappointing and demonstrates a further disconnect and lack of understanding by policymakers on how important this equipment is for landscape professionals.”

Because there are significant upfront costs to switching to battery, it is crucial to have an adequate rebate program in place with the resources to help landscape professionals make the transition.

Bray says while the bill has been signed into law, there are still opportunities to change the timeline. NALP met with CARB on Wednesday, Oct. 13, along with a number of its members and the California Landscape Contractors Association to discuss changing the timing of the implementation.

“As an industry, we care deeply about how we can positively impact climate change and we want to make that transition as soon as possible,” Bray says. “It’s just not there yet.”

Once CARB publishes the rule, there is a 45-day comment period. Bray says it is crucial for landscape professionals to participate and let CARB know that the transition in 2024 is too soon for commercial users.

After the comment period, CARB has time to amend the rule before it goes to a vote which is projected to take place in the first two weeks of this December. 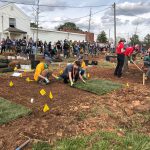