Tree Care: Dealing with Winter Damage - The Edge from the National Association of Landscape Professionals

Winter can be a trying time for trees as there are a number of ways they can become damaged over the colder months if the right combination of conditions occurs.

For some of these types of injuries, the symptoms may not appear until the spring. While the best practice is to take proper measures during autumn to prepare trees for the winter months, there are ways to help manage the damage after it has taken place.

Winter stress can also leave trees predisposed to biotic diseases, so it is important to help them recover from winter damage before other threats can harm them further.

Even during the winter months, broadleaf and needled evergreens are still transpiring water. Water loss can be increased on days with strong winds and sunny weather, even when the ambient temperature is low. If the ground remains frozen, the root system is unable to replenish this lost water.

Symptoms become apparent after the snow melts. Foliage will start to brown at the tips and progress inward or for broadleaf evergreens the leaf edges will brown first. The southwest side of the tree will often show the most winter burn damage. In severe cases, the entire plant can brown and die.

For evergreens like junipers and yews, prune the dead, brown or damaged tissue in mid-spring after new foliage is produced. Pruning is not necessary for evergreens like pines and spruces as they produce new growth at branch tips that will replace burn-damaged needles.

Another injury that will commonly appear on the south or southwest side of trees is sunscald. This is a problem for thin-barked trees like ash, maple and fruit trees, as well as younger trees. Sunscald can take place when the tree bark is warmed by the sun during the winter. It can warm the trunk as much as 18 degrees higher than the air temperature. When the trunk cools at night, the cambium layer beneath is damaged.

Symptoms of sunscald include a sunken, dried, cracked area of bark that exposes the trunk. This area can become infected with fungus. Depending on the severity of the injury and the tree’s overall health, it may seal over this wood within several years. To help with callus development, remove dead or loose bark around the wound. Keep the tree vigorous with proper irrigation, especially during dry seasons.

While salt stress is more frequently an issue for turfgrass or shrubs near roadways, it doesn’t mean trees are never at risk of being exposed to salt. Salt damage can occur when salt lands on plant leaves and twigs, reducing their cold hardiness and making the tissue more susceptible to freeze damage.

When salt dissolves in the soil the sodium chloride ions separate and make certain nutrients unavailable to plants and interfere with chlorophyll production and photosynthesis. Symptoms of salt stress vary based on the type of tree but bark discoloration, yellowing leaves or canopy dieback are all possible signs.

If salt spray from roads is a problem, rinse the foliage and branches of any affected trees when temperatures are above freezing when and again in early spring. If runoff is unavoidable, flush the area around the trees in early spring with a drench application to leach salt from the soil.

Heavy snow and ice can break tree branches if it is too much to bear. High winds can also increase the likelihood of damage occurring. Snow breakage can affect multi-stemmed evergreens like juniper, yew and arborvitae. 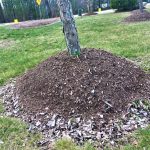