NALP’s Legislative Days were to be held in person this year, but COVID restrictions in Washington D.C. and on the Hill led to the switch to a virtual event.

Despite the change to virtual, More than120 industry professionals took part.

“I think it makes sense, especially during COVID, to transition over and we had more folks getting involved,” says Karla Segundo, manager of government relations for NALP.

One of the issues Legislative Days focused on was the H-2B program’s need for supplemental visas and encouraging House representatives to co-sponsor HR 3897, which would provide a permanent returning worker exemption. Other topics included climate change, integrated pest management and environmental policies.

“We have a Senate bill by Cory Booker, from New Jersey called Protect America’s Children from Toxic Pesticides Act,” Segundo says. “If passed this onerous legislation would essentially gut our long-standing pesticide regulatory framework detailed in the Federal Insecticide Fungicide and Rodenticide Act (FIFRA). The science-based approach of FIFRA and the role of EPA would be replaced by activist groups being able to petition for the removal of specific pesticides while also allowing every locality throughout the nation the ability to restrict pesticide use on private property. It would be the worst-case scenario for our industry.”

In just the span of two days on Feb. 15-16, 76 meetings were held with congressional staffers and over 100 meetings were conducted in total. The states with the strongest participation included Texas, Ohio, Virginia, Maryland and Pennsylvania.

“I think it’s always great to have the members on these calls, some of them get very nervous, especially if it’s the first time joining these calls but they quickly realize how both easy and gratifying to tell their story and advocate for the industry,” Segundo says.

In these meetings, NALP staff will typically provide some background on the issue and what the administration is doing so far before passing it over to members to tell their stories.

Last week, even though Congress was in recess, NALP was able to have a few calls where legislators joined their staff, including Rep. C.A. Dutch Ruppersberger III (D-Maryland) and Rep. Lloyd Smucker (R-Pennsylvania).

Segundo says when scheduling these meetings on behalf of the industry, the Congressional offices want to know who lives in their district or state.

John Deere and Bayer partnered on this year’s Legislative Days.

“Thank you to our sponsors and everyone who stepped up to help us with these meetings,” Segundo says. 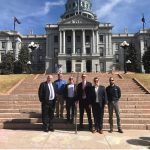