Meet Loriena Harrington, 2021 Woman Entrepreneur of the Year - The Edge from the National Association of Landscape Professionals

This year’s Woman Entrepreneur of the Year recipient Loriena Harrington developed an entrepreneurial spirit at a young age. From selling Girl Scout cookies at 8 years old to mowing lawns and being a golf caddy at 12 years old, Harrington says she was always motivated by the sale.

From the age of 14 to her senior year in college, Harrington had been on the path to become a golf course superintendent as she worked her way up on the grounds staff and was studying environmental horticulture at the University of Minnesota.

“As a senior in college, I developed acute allergies to grass and other pollens,” Harrington says. “I suffered through that for a couple of seasons, but it became ultimately very clear to me that I could not continue on working on a golf course, primarily because of the allergies.”

She was heartbroken but shifted her focus to landscape design. It was in 2000 she put together the business plan for her company, Beautiful Blooms, LLC. She spent $25 to get flyers printed and then went door-to-door in a new neighborhood to generate some leads.

On that walk, a homeowner who was interested asked her how much she charged, and she had no idea. Harrington blurted out ‘$400’ and the homeowner said, ‘Let’s get started.’

She says it was an experiment at the time but eventually decided to leave the golf course, move to Milwaukee and launch her business officially in 2001. In the years following, the driver for the company’s changes in services was mostly based on where the opportunity was at the time.

Beautiful Blooms went from solely providing designs for DIY homeowners and contractors to picking up some maintenance contracts to supplement their revenue. Harrington’s success led her down the road of doing small enhancements and installs. In 2008, the housing market crashed, and Harrington stopped creating designs and focused on maintenance.

“We would pivot so that we could keep moving forward and we wouldn’t get sad or bothered by what we couldn’t do anymore,” Harrington says. “We were always looking forward to the opportunity that was in front of us.”

Harrington joined the Jeffrey Scott peer group, and in 2016, they visited her company and her employees told the peer group they wanted to do bigger, more intricate projects. Beautiful Blooms went back to doing installations and selling projects like brick patios.

In 2018, the company almost folded when Harrington had an injury from skiing that required reconstruction of her leg and knee. She wasn’t able to do anything for eight weeks causing her to miss the entire sales season. They were missing revenue targets and Harrington had to let people go. By mid-July, Harrington was fully recovered, but she says it was a struggle that year.

“Out of that came some really important lessons,” Harrington says. “It made it abundantly clear that I cannot depend solely on myself. I need to make sure that my team is adequately prepared for me to be absent, whether it be planned absence or a strategic exit to the company someday, or it be some other set of scenarios that are unpredictable.”

Harrington also had a moment of clarity and decided to focus on offering horticultural services, rather than something she wasn’t passionate about.

“Employees will come and go over the years, and I cannot continue to just respond to where the opportunity is or what the talent is that comes my way,” Harrington says. “I need to be strategic.”

In recent years, Harrington has highlighted Beautiful Blooms as a woman-owned company, and now more than half of her employees are female. She says while her overall experience in the industry has been positive, she has had to have conversations with clients who have complained that her female workers are not strong enough or are too little.

She says her proudest achievement is receiving the Woman Entrepreneur of the Year Award.

“To be the recipient of an award like this, that’s validation,” Harrington says. “At the end of the day, you’re trying to always do your best to provide great service for your clients, a great environment for your workers, and takes a ton of effort. To have that recognition means the world to me.”

Moving forward, Harrington plans to continue to strengthen her company’s market position and implement technology in their business that helps them, like robotic mowers. She also plans to start sharing ownership and not make the company’s success dependent on one person.

“I don’t want to retire from my career as the sole owner of Beautiful Blooms,” Harrington says. “I want to retire from my career as a participant of Beautiful Blooms, as a consultant giving back to my industry, to other women entrepreneurs, other small companies, as they’re finding their way. I know that my 30 years of experience is something that is valuable and I want to share it.” 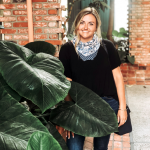 Photo: Kayla Simar Photography
‘Opportunity of a Lifetime’: One Young Professional’s Journey in the Landscape Industry 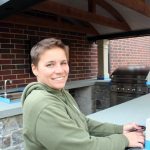