Many environmental issues have come to the public’s attention in recent years and one, in particular, is water conservation. With droughts becoming more prevalent and water prices rising, it’s important to prevent water waste inside and out.

“When the convenience of automation and freshwater come together, there is a high propensity for waste,” says Russ Jundt, founder of Conserva Irrigation based in Glen Allen, Virginia.

“Most landscape irrigation systems are programmed to water automatically by a simple controller two to three times per week, regardless of current weather patterns or conditions. The zone’s run times are often based more on ‘gut feeling’ than on science, and these run times are most likely not adjusted to meet the seasonal water requirements of plants.”

Jundt adds that the “set it and forget it” mentality leads to little or no oversight and water being wasted.

“In fact, U.S. households waste over a trillion gallons of water each year and 1.5 billion gallons daily on irrigation losses alone,” Jundt says. “Clearly, irrigation is an area in dire need of remediation at many properties, and smart controllers are a key component for improving efficiency.”

Smart controllers have the ability to adjust their schedule based on the weather, while with a traditional controller a contractor may be changing the schedule four to six times a year.

“Think of smart controllers as a thermostat for your outdoors,” Jundt says. “None of us would ever heat or cool our home on a timer signaling to the HVAC system to run arbitrarily based upon a predetermined schedule. Instead, we employ a thermostat to discern when and for how long the system should run to achieve the desired result. Similarly and intuitively, it does not make sense to run your irrigation system on a predetermined schedule with a simple timer, yet tens of millions of systems do just that each day.”

Traditional controllers are similar to a programmable light timer you’d use on vacation. You can tell a controller what days and time to come on and how long you want it to run, but that’s it. The number of times it gets changed is really going to depend on the water manager.

“It’s very uncommon to have a water manager say ‘Okay, I’m going to look at what the ET (evapotranspiration) rates have been for the past three days, and I’m going to develop a schedule based upon that,’ because the math and the formula to get from ET to a run time, or a watering time, is pretty extensive,” says Eric Santos, vice president of irrigation services for BrightView Landscape Maintenance, based in Blue Bell, Pennsylvania. “You’d have to do that every day and for every zone on the controller.”

Instead, managers are using their educated experience to make a decision on how much time to increase or decrease when making adjustments to a traditional controller.

“A smart controller uses a combination of historical, current, and future weather data to discern when and how much water to deploy through the irrigation system,” Jundt says.

Each manufacturer has a different proprietary way of coming up with that data and sending it to the controller but the ET rate is particularly important. It is calculated based on solar radiation, temperature, humidity and wind.

Another major feature of smart controllers is their connectivity.

With this level of connectivity, the controller can send an alert when there is an abnormal flow condition.

“Every one of our customers can relate to the issue of where they had either a main line break, or a stuck valve and water ran for 24 hours,” Santos says. “Now you have the ability to have flow sensing, or you can program the clock to shut itself down and send you an alert.”

Santos says that when he talks to customers about smart controllers, although they think the controller is altering its schedule based on the weather is neat, the idea of the controller shutting itself down during a leak is something they can all relate to.

“To them, it’s like ‘Jeez, really? Wow, I just had that issue a month ago. How soon can you put this thing in?’” Santos says. “That’s starting to really provide more value to our customers than its self-adjusting capabilities.”

Conserva Irrigation only installs smart controllers as part of their core value proposition. Jundt says it’s relatively simple to update any system regardless of age, but it is important to test the entire system and collect the zone data before removing the old timer.

“Keep in mind that fixing all leaks and broken heads is the first priority before installing a smart controller,” Jundt says. “This will ensure better distribution of water and greater water savings.”

Santos says on commercial properties it is more of a challenge to update an irrigation system with smart controllers due to there typically being more than one controller and in some cases a single water meter.

“If you have a limited water supply the thing you have to be cautious of is not to overtax your system to where your smart controllers are increasing your watering but you could run into a situation where you have too much water being turned on all at the same time,” Santos says.

The solution to this is finding a system where the smart controllers talk to each other, so they don’t overtax the system or where the controllers take turns and run through their cycles as quickly as possible.

While it’s going to vary case by case how much water you can save with a smart controller, Santos says it’s typically 10 to 15 percent. In the customer’s mind, they might hear you’re guaranteeing 15 percent in savings, so you need to be careful to not overpromise and underdeliver.

Santos says they ask their client for three years of historical water use and average it out to give them an estimate of how much water the smart controller will use. Jundt says smart controllers can reduce water usage up to 25 percent and even more when paired with an onsite rain sensor.

“The rain sensor verifies that the property actually received rainfall and shuts the system down during and after the event for a period of time depending upon the amount of rain,” Jundt says.

Most water savings with a smart controller come in the fall. In the spring it’s easy to see when it’s time to turn up the water when you start to see stress in the landscape. However, in the fall when days get shorter, there’s less solar radiation and the amount of evapotranspiration starts to decrease.

“Even though it may feel warm because the temperatures are still warm, the days are getting shorter, which means we need to start cutting back on our watering,” Santos says. “That’s when it really is tough to tell that you actually should be cranking back on the water. That’s really where a smart controller excels.”

Why Clients Love Them

When it comes to getting clients on board with making the switch, it doesn’t take much convincing. Santos says it’s hard to argue with the data if you look at the historical water use.

Jundt says Conserva technicians ask customers with old controllers, “Why would you allow an outdated piece of equipment to control your water bill? Why not allow us to upgrade to a controller that will adjust to the current and future weather patterns?”

Other water conservation efforts such as putting in drip irrigation require more labor and can take longer to recoup the costs. Smart controllers have the lowest cost and the greatest impact.

“The smart controller is typically going to have the quickest payback period because it’s the one thing that you hang on the wall that’s going to impact the majority of your landscape,” Santos says.

For BrightView’s customers, they like the flow sensing capabilities the most.

“Just having a master valve and a flow sensor in place and having that smart controller being able to shut the system down,” Santos says. “It just seems like that drives much more excitement than the fact that it’s going to change its schedule on a daily basis.”

“Conserva Irrigation clients love being connected to their sprinkler system through an app on their device of choice, allowing them to control and monitor the system with ease,” Jundt says. “Additionally, the water usage reports highlighting their water savings ratifies their decision to install a smart controller.”

This article was published in the July/August issue of the magazine. To read more stories from The Landscape Professional magazine, click here to subscribe to the digital edition. 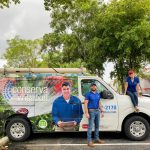 Faces of the Industry: Ellie and Juan Lamonaca 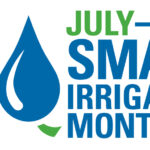 Be a Smart Irrigation Month Leader