Landscapes of the Month: Transforming a Tired Lakefront Property Into a Jewel - The Edge from the National Association of Landscape Professionals

Home » Award Winning Projects » Landscapes of the Month: Transforming a Tired Lakefront Property Into a Jewel

Landscapes of the Month: Transforming a Tired Lakefront Property Into a Jewel

On Elkhart Lake, Wisconsin, a homeowner purchased a dilapidated cottage and run-down property with the intent of converting it into a summer home where their large family could gather.

When they heard of how Landmark Landscapes, Sheboygan Falls, Wisconsin, had completed a project for a nearby neighbor that called for a lot of permitting, they reached out when it came time to redesign their lakeside landscape.

Landmark Landscapes’ work transforming this cottage into an inviting space for the family to relax, play and make memories, earned them a Gold Award in the 2021 Awards of Excellence.

“It’s such a validation of the incredible team that we have,” says Joe Majerus, owner of Landmark Landscapes. “It’s really special to us. We talk all the time internally about wanting to be the best and build the best team in the industry. To have the validation of our peers and the National Association of Landscape Professionals just means so much. It means just a tremendous amount to the crews that worked on this project, because they’re not just hearing it from us or the clients. But they know, it’s validation by the entire nation of landscape professionals.”

Majerus says this was a two-phase project. Aside from the complex permitting, they had to get variances for the side yard setbacks, mitigation plan and several other aspects that could have shut the project down before they ever got started. Majerus says it was a total gamble whether the board would approve what they planned to do.

When they had finished the first phase, the Village of Elkhart Lake had changed their ordinances about the amount of impermeable space per property. They now acknowledged permeable paving as an effective mitigation technique against impervious surfaces on a lot.

“I had known that this client had always dreamed of putting an addition on this cottage so that she could have a dining room big enough to accommodate her whole family, 20 plus people,” Majerus says.

What had been an impossibility prior to the change in the ordinance was now a reality. Majerus says when he ran into the client one night, he mentioned this possibility to her and she immediately wanted to know more about the permeable paving.

“As the ground froze, we could still continue to work because of the nature of the permeable paving base, it’s actually a pretty suitable substrate for working in subfreezing conditions,” Majerus says. “It’s not very comfortable, but it’s doable.”

They also built temporary structures on the outside of the home and heated it with propane heaters to keep the crews warm and prevent the masonry from freezing, as they did the masonry on the home to create a sense of oneness between the landscape and the property.

This phase of the project also took place during the Polar Vortex of 2019 when temperatures dropped to -25 degrees and the frost went eight feet deep. Majerus says they wouldn’t work when it was dangerously cold, but when it was just an uncomfortable cold they powered through and strived to stay warm with cold-weather gear, heaters and frequent breaks.

The main challenge of this site was the tight access. Only a small skid steer could make it to the worksite on the back of the home. There was no room to turn around so the operator would have to back his way out, making moving material slow and problematic. Majerus says there was no room for staging material either.

The health of the lake and general ecology were important to the clients. A solid partnership between the general contractor and Landmark ensured the sustainable design was brought to life.

“As a professional, sometimes we have to know better,” Majerus says. “And at the end of the day, we know what we can do. If we stick to our guns, we can really create these phenomenal spaces for the clients, even when they don’t think it’s possible.”

The drainage system in the retaining walls is engineered to transport the water to the rain gardens. The gardens and landscape were planted with hundreds of pollinator-attracting perennials, trees and shrubs.

With the permeable pavers, rain gardens, proper drainage systems in the retaining walls, turf space and gardens, 100 percent of the rainwater is captured. No water leaves the property unfiltered.

What was a tired cottage was transformed into a destination and jewel that has all the amenities for a close-knit family to create generations of memories.

Interested in participating in the Awards of Excellence? Be sure to enter your project when entries open in February 2022. 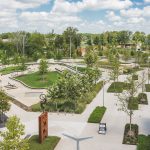 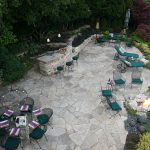 Photo: Kimber Johnson
Landscapes of the Month: Designing Gardens with Both Form and Function 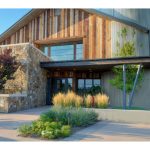