Landscapes of the Month: Designing Gardens with Both Form and Function - The Edge from the National Association of Landscape Professionals

Home » Award Winning Projects » Landscapes of the Month: Designing Gardens with Both Form and Function

Landscapes of the Month: Designing Gardens with Both Form and Function

When one of Landmark Landscapes, Inc.’s clients reached out to them about their degrading patio on a bluff what started out as one project ultimately turned into three unique spaces that combined form and function.

The homeowners had hired Landmark in the past for some small enhancement projects, but it was after the company had done some significant projects to the north, south and west of their home that the clients had them look at this project.

Located in Sheboygan, Wisconsin, the project started in the spring of 2016 when the client approached the firm about restoring their unstable and unsafe patio. The patio was located on a bluff overlooking Lake Michigan that was eroding due to stormwater runoff.

The clients wanted a design that complimented their mid-century modern home while allowing them to enjoy the views of the lake. They had put off the project of restoring their patio for twenty years because they could not source the same limestone that the exterior of their home had.

Joe Majerus, owner of Landmark Landscapes, says finding the limestone to match was the easy part thanks to local stone quarries. The interesting part was finding material to match the eroded outcropping and wall stone. Some pieces they found buried in the gardens as they began the removal phase of the project.

“Procuring the rest of the stone for accents was really a matter of using our local network of other contractors,” Majerus says. “We were able to find the eroded limestone boulders at the yard of a local excavator that had taken out of a farmer’s field. This was really fortuitous because the heavily eroded boulders and outcroppings are almost impossible to find commercially these days. As a bonus, because the boulders had been part of a fence line for the past 100 years or so, they had a perfect patina and moss growth on them already, so they looked like they had been in our new landscape for decades from the minute they were installed in their new home in our gardens.”

The finished project earned Landmark Landscapes a Gold Award in the 2020 Awards of Excellence.

“Winning the award is such a nice validation of our team’s incredible talents, it really means the world to our entire team,” Majerus says. “We are so proud of everyone in our organization and all of the hard work that goes into each and every project, not just the award winners. We talk about being the best we can be all the time and it is really evident when we look at the quality of the work our teams produce on a daily basis. It feels great to be recognized by our peers and the industry for all of our hard work!”

A positive challenge the company dealt with was the customers being involved with the design and installation process on a granular level, making changes daily. The homeowners were very visual and had a hard time picturing things until they were physically constructed. There were a number of occasions where once a feature was built adjustments needed to be made once they saw it.

While this isn’t normally how the company operates, they worked with the clients and let the project evolve. Majerus says working with two clients who are artists wasn’t hard, but there was a definite learning curve.

“Our clients are incredibly talented artists and they both spend countless hours in the gardens each week, so they had invaluable insight into the site and how they used it,” Majerus says. “We had to develop our working relationship as the project went on. It was really fun to get to know them and their tastes better as we learned to see the garden spaces through the lens of their preferred style. The clients are also very open to our own artistic visions and we really ended up forming a great design team. The finished landscape is really a testament to the teamwork of the clients, our design team and our craftsmen. Everything came together to make a completely unique garden experience.”

After renovating the Terrace Garden, the clients wanted to continue to create new garden spaces around their home. This includes the Walking Meditation Garden and the Reflection Pond.

“The project was completed in several phases,” Majerus says. “Each phase went through its own unique design phase. The design team would meet with the clients and produce a rough concept with some associated budgetary numbers for materials and labor. This process took anywhere from a couple of weeks to a couple of months depending on the portion of the project. Much of the detailed design work was accomplished on-site during construction based on the raw materials that were able to be sourced for the project.”

To make the project especially interesting, the company had to meet several hard deadlines so the clients’ famous fourth of July party could continue.

The Terrace Garden is a space where the clients could entertain or simply relax while taking in the view of Lake Michigan. It features a 1,400 square foot patio where much of the stone was reclaimed from the existing patio.

Landmark created a dry-stack bar on the edge of the patio that flows in an 18” seat wall bordering the backside of the patio. It features a custom-built storage cabinet for a garbage can and bar accessories. The natural gas fire pit was designed so you don’t realize it’s a firepit until it is turned on.

A table was created from a 4,000-lb eroded limestone boulder from the farmer’s fence row. A six-foot tempered glass tabletop was installed on it and the top of the boulder was placed on top so the glass appears to go through the boulder.

Above the table, a chandelier is suspended with a 35’ stainless steel cable that is anchored to a tree and to the home.

“The whole stone table and chandelier element was really a collaborative idea between the clients and our design team,” Majerus says. “We wanted to create a magical view out of the lower patio doors with the massive stone that creates the table base, but we really were looking for a way to give the space a sense of whimsy to counteract the bulkiness of the 4,000-pound stone. When the idea of a chandelier was brought up when we were installing other moonlights in the tree. One of our team members was in the tree and came up with the idea of stringing the steel cable.”

There are 46 other fixtures that light the terrace space at night as well. While there is plenty of space to enjoy the view and relax, the true function of the patio is to capture and manage stormwater to prevent the erosion of the bluff. Mexican beach pebbles serve as dry stream beds and pipes were installed to direct stormwater to the municipal storm system.

The second phase of the project was the Walking Meditation Garden. The aim here was to play off the Eastern influences in the clients’ mid-century modern home while creating a tranquil destination for walking meditation.

Landmark understood their clients did not want to sit still and instead created a space they can traverse multiple surfaces as they journey through the space looking at art and diverse plant material. Landmark composed individual rooms to guide the visitor through the space and keep them focused on the present and the path in front of them.  Eroded limestone boulders were incorporated into the meditation garden as well.

Plant material was selected to reflect a traditional Japanese style garden with room for annuals and eccentricity.

Previously, this space felt cut off from the rest of the home. They also had to find a drainage solution as the water from the driveway all ended up in this area. The captured stormwater is used in the pondless waterfall feature in the middle, while the overflow is directed to the municipal storm system.

The third phase of the project was the Reflection Pond. The company worked to integrate a long-neglected space into the other two gardens as this space had become overgrown and overlooked.

The pond is filled with a majority of the stormwater runoff from the house and also attracts wildlife. Like the other spaces, the overflow is directed to the municipal storm system.

The challenge was creating a garden that was attractive without trying to compete with the views of the Terrace Garden. A Dwarf Hemlock was selected at a boutique nursery to serve as the focal point of the Reflection Pond. This space is meant to be viewed from inside as the clients move through their home.

The main obstacle was there was no machine access as this space was bookended by the existing gardens so heavy limestone slabs had to be moved into the space by hand.

“The limestone slabs that make up the bridge over the reflection pool weighed between 1,100 and 1,500 pounds,” Majerus says. “We moved them all the way into the garden by hand using rollers and straps. It was quite the process, but our install team figured out how to accomplish it and the feature is a showstopper in the gardens.” 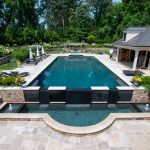 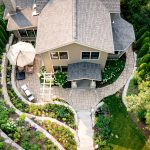