Landscapes of the Month: Blending the Indoors with an Outdoor Living Space - The Edge from the National Association of Landscape Professionals

Home » Award Winning Projects » Landscapes of the Month: Blending the Indoors with an Outdoor Living Space

Landscapes of the Month: Blending the Indoors with an Outdoor Living Space

In Highland Park, Illinois, a homeowner had purchased a property with plans of updating and modernizing the interior and the exterior. One of the reasons they chose the property was because of the potential to add a swimming pool.

Because James Martin Associates Inc., based in Mundelein, Illinois, maintained homes in the client’s neighborhood with well-branded trucks and trailers, the client instinctively gave them a call about working on the design/build project.

The design team could tell it wouldn’t be as simple as excavating an area for the pool and blending it with the existing patio. The client agreed to go with a clean slate so the multi-level terraces could expand, the indoor rooms could be expanded to the outside and culminate with a swimming pool.

The client had high expectations for the project and nicknamed the job ‘Project Splendiferous.’ James Martin Associates’ work on this project earned them a Gold Award in the 2020 Awards of Excellence.

“We knew that this would be a special project biased on the homeowner’s enthusiasm throughout the project, but to meet the expectations of homeowner that then becomes a long-term professional relationship is very fulfilling, but to then have other landscape professionals agree that this a ‘splendiferous’ project is confirmation that the homeowner’s hopes were truly realized,” says Brian Jordison, landscape designer for James Martin Associates.

Jordison says the challenging part of the project was helping the homeowner visualize the plan. The design team created multiple concepts addressing the pool location and layout.

“They knew what they wanted but to look at it in plan view did nothing to get them excited, so 3D models were created with the correct plant shapes, massing and colors,” Jordison says. “This gave them the confidence that the project was headed in the direction they wanted. After the design was approved the installation was executed without any troubles.”

The existing landscape had a distinct separation from the outdoor living space and the rest of the backyard, which wasn’t conducive to the owner’s goal of using the entire yard. The homeowner wanted an overall look with a strong emphasis on linear lines. Walls, steps and planting beds help define the different functions of each space.

“The planting beds were designed to include the mature trees in the front yard with long sweeping curves to create pockets for seasonal color,” Jordison says. “Plant sizing also played into the flow of the planting beds. There were key areas of the house that the homeowner wanted to either enhance or screen depending on how you approached the house. In the backyard sweeping beds continued, however the primary goal was to preserve as much lawn space for recreation.”

The design team also created continuity by pulling the house stone into the patio spaces. Some of the design elements included a fire table on large paving pads with exposed joints, and a barbecue wall that was placed near the kitchen window. A small shelf at the base of the window created a pass through to avoid walking through the house.

One challenge of the property was how it was relatively flat. There was not much pitch to the yard to divert runoff without installing catch basins with lift pumps, which the homeowners didn’t want to use. The design team correlated with the architect, builder and pool contractor to review the drainage issues that had to be addressed in the scope of work.

To expedite the permitting process, a simple drainage plan was submitted. However, in the early stages of construction it was found to be inadequate as it interfered with planting beds and created drastic slopes near the edge of the hardscapes.

In the end, the design team created a network of pipes that connected to the house downspouts and channeled runoff from the patio to the concrete basketball court at the lowest part of the backyard.

“The challenge was directing the runoff in ways that didn’t impede the flow of the bedlines or create a swale in the lawn areas,” Jordison say. “Swales run along the perimeter of the property and either channel the runoff to front public storm sewer or to the rear raingarden.”

After the installation was finished, the property was transitioned to the residential maintenance team and they have been overseeing the site since 2018.

Interested in participating in the Awards of Excellence? Be sure to enter your project when entries open in February 2022. 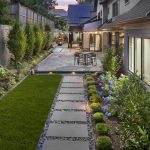