A Pennsylvanian family was looking to upgrade their home’s curb appeal and their backyard pool. They wanted to take full advantage of warm summer months. They had painstakingly updated and refinished their house and wanted an outdoor space to match.

With a general idea in mind, they contracted Earth, Turf, & Wood to help make their dream a reality.

The owner’s main goal was to create an atmosphere that increased and maximized family time. They wanted a unique pool environment with an expanded patio area. They also wanted a shaded area with an outdoor kitchen. Their backyard had a patio, pool and gazebo. But they wanted to enlarge the patio, expand the pool size and recreate an outdoor entertainment and living space that could be enjoyed with family and friends.

“They wanted to enlarge the pool. And they wanted to add new surface, new tile and new coping,” says Mary Dresser, registered landscape architect, Earth, Turf, & Wood. “There was an existing spa we wanted to enhance, and the existing pool equipment needed updating and screening. And then just overall they wanted more space.”

The owner wanted a timber-frame style pavilion with a grill, pizza oven, ice maker, cabinet space for blenders, sink, a fireplace and a large seating area. The area also needed to double as entertainment space so that no matter where someone was sitting, conversation and interaction would be easy and views would be great.

But it wasn’t all about the backyard. With a renovated house and an upgraded yard, the front of the home needed to be brought up to par as well. The project also included a revamped sidewalk, steps, plantings, streetscape and parking area in the front.

Between the front side of the pool and the road, there was a significant natural slope and a sand mound. A retention basin and a retaining wall were on the opposite side of the pool. This was elevated about 6 feet higher than the retention basin below. This gave the Earth, Turf, & Wood team some pretty hard parameters to work within.

“They had an existing pool in this area, and concrete pavers in the patio and a small, octagon, pre-made gazebo kind of just plopped in one corner,” Dresser says. “One of the biggest challenges in this particular case was all of the existing elements and the grading and sloped areas in between them that we had to traverse in order to make this newly expanded pool area fit into the existing situation.”

In addition, the pool was separated from the house by a grassy area that was 5 feet higher. So the team needed to work with elevation changes.

The first thing the Earth, Turf, & Wood team did was request that the owner get the property surveyed. They got topographic and boundary surveys because at the far end of the pool they were near the property line.

“One of the things we, as a professional company, do is make sure when we’re designing a project that we know where setbacks are, what setbacks apply to pavement, which setbacks apply to accessory buildings and so on,” Dresser says. “When we begin the first moments of design, we’re following the municipal regulations so it can actually be built. It becomes more than just a pretty picture.”

The survey allowed them to more confidently approach the varying levels that would be necessary to create the space. It helped identify where walls were needed, how drainage would work around the expanded areas, and what type of grading would be necessary.

Once the plan was in place, they were able to get creative with the installations. Dresser spent time focusing on the layout of the pavilion as it related to the pool to maximize line-of-sight.

“I made sure that when this client is at the grill, for instance, grilling or serving adult beverages to those people who were sitting in the bar area, that they’re positioned in such a way that everyone can interact with the other elements around the pool,” she says. “So, he can see the fireplace, he can see the pool, he can see the spa, he can see people descending down the main entrance points. I spent a lot of time playing around with exactly how that should be designed and oriented and located so that we’re creating a unified entertainment area.”

The clients have been extremely pleased with the project, and claim it drastically expanded family time and entertainment time. As elements were added, an entire cohesive plan came into place. This included the outdoor kitchen and pool, an updated spa, a game court for playing cornhole, a pea gravel walking path around koi ponds, ambient lighting, and an overhauled landscape.

“The juxtaposition of the elements down by the pool enable the homeowners to view them year-round,” Dresser says. “Some of the plant materials we put in we wanted blooming at certain times early in the season. This would entice the homeowners to use the pool area before Memorial Day.”

In the front of the house, the streetscape included updated plantings used as a screening. And the sidewalk and parking area made it easier (and more scenic) for guests visiting the house. Overall, Earth, Turf & Wood renovated the entire property in a way that maximized the outdoor experience.

Heather Tunstall, a freelance writer who has landscape industry experience, wrote this article. 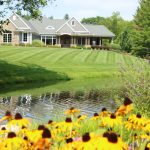 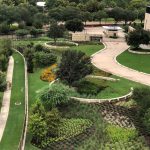