2022 Judges' Award: Installing a Next-Generation Urban Campus - The Edge from the National Association of Landscape Professionals

In midtown Atlanta, Georgia, is the three-acre headquarters of Norfolk Southern, which was created as a next-generation urban campus. The two office towers are unified by a five-story campus-style hub that serves as a destination for employees to work and socialize.

Ruppert Landscape was brought on to help with the landscape installation by a general contractor they had worked with a number of times in the past. Their work on this project earned them one of the two prestigious Judges’ Awards presented in 2022, which is selected from the highest scoring Gold Award winners of the Awards of Excellence.

“It was a sense of accomplishment, just to be able to recognize a job well done and deliver a great product for the client,” says Adam Bennett, branch manager of Ruppert’s Atlanta, Georgia landscape construction branch.

The client wanted a headquarters where employees don’t just work but thrive. The amenities include a dining facility, rooftop garden, greenspace, fitness center, on-site childcare and training spaces. It took Ruppert seven months to complete, and they overcame numerous challenges during the project.

Pedestrian and vehicular traffic had to be managed on a daily basis. Moving materials to the upper levels required the use of many cranes throughout the installation. Close coordination between the crane operator, radio technician, receiver and personnel offloading the material as well as the general contractor was necessary to ensure there was no interference or danger to other contractors.

Two full-time employees were dedicated to facilitating the delivery of the truckloads of materials. They had to schedule, coordinate, stop traffic and navigate the trucks in and out of the jobsite. Barricades, barrels and signs were set up every morning and taken down every evening to reduce roadway and parking garage impact.

At one point, an adjacent parking lot that was used for crane placement was damaged and the general contractor wasn’t permitted to use it for the project’s duration. This forced Ruppert to relocate their material drop off area and create tighter delivery schedules. The company practiced Just-In-Time principles with the deliveries due to the limited storage area. Bennett says this was their first time using the Just-In-Time principle.

Ruppert opted to do their crane work at night so the other trades could utilize it during the day. A five-person crew used it from 11 p.m. until 7 a.m., loading the materials on the amenity decks so the daytime team could install them the next day.

Bennett says at any given time, there were at least 30 or 40 Ruppert employees working on the site and another 15 to 20 subcontractors. At the high point, as many as 500 people were all working on this compact site. There were two general contractors as well, one for the exterior and one for the interior. Daily meetings were held with both GCs and the other trades on the site to ensure an efficient and safe work environment.

Since the majority of the project was over-structure, heavy equipment use was limited and there was a focus on soil composition and weight. Over 107,000 square feet of filter fabric, 70,000 cubic feet of expanded polystyrene, 36,000 square feet of water storage cells, and nearly 3,000 cubic yards of scientifically-engineered custom soil mix were carefully installed to reduce weight, mitigate and control runoff and create a strong foundation for plantings.

Special focus was given to preserving water resources, securing local vendors and using native and adaptive plant material in order to achieve LEED Gold Status for the project. The irrigation system utilizes recaptured rainwater and has 31 zones.

Nearly 50 percent of the project was landscape installation. 16,400 perennials and grasses, along with 2,800 shrubs and 87 trees were installed throughout the campus and on the terraces. Native trees, grasses, plants and wildflowers were grouped with similar watering needs. These green spaces at the ground level and on several of the seven different rooftop terraces also aid with heat island reduction.

Over 686 cubic yards of exposed aggregate concrete were placed using the crane. It was hoisted to the 4th, 10th and 17th floors.

In April 2021, a change order to add a cantilevered staircase caused Ruppert to use the tower crane with a concrete bucket to get the cement to the fourth floor. The stairs were formed and poured in close coordination with the electrician who had to set strip lights within the stair risers. 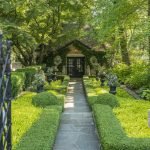 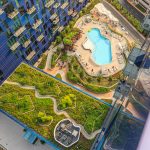 Photo: Ruppert Landscape
Landscapes of the Month: Creating an Oasis at the EXO Apartments