Foxglove Gardening: Serving the Fine Gardening Niche - The Edge from the National Association of Landscape Professionals

In Flagstaff, Arizona, Foxglove Gardening has been offering fine gardening and landscape maintenance services for over 35 years.

Founded by Joan Abbott, the company was purchased by married couple Jason Minshew and Annie Taylor when they learned she wanted to retire.

Previously, Minshew and Taylor had worked together at a landscape architecture firm called Gardens in Austin, Texas. They eventually married and had their first child before starting their own full-service landscape business, JBird & Co, in 2008. The couple ran the company in Austin for eight years before eventually closing it down.

“Austin was getting really big, which was great in a number of ways because it offered a lot of opportunities,” Minshew says. “The character was changing. We lived there for nearly 25 years and over that time, it just kind of outgrew some of the things that we found charming when we move there.”

They sold their house and moved to Flagstaff, Taylor’s hometown. They were introduced to Abbott and decided to buy her business as she had a number of maintenance contracts in place that made it valuable.

“We made enough money when we sold our house in Austin we could either spend that little chunk of profit on a house, then try to build up the contracts and work from there, or invest the money in Foxglove and start with a lot of work and a strong reputation and a lot of the clients that were Joan’s clients who also knew and love Annie and her family here,” he says. “We were very well supported and embraced with this work when we came.”

The couple took over Foxglove in April 2016 and Minshew says it was a fun challenge taking on a company with a 35-year legacy.

“She did things very well in her way,” he says. “We embraced that because we didn’t want to shock our customers, who had been used to Joan’s way of doing things.”

As part of the purchase, they retained Abbott for a season to smooth the transition.

“We’ve kept all of the customers with the exception of a couple that we couldn’t satisfy,” he says.

Since then, they’ve also added some sizable contracts with the city of Flagstaff, growing slowly and making cautious steps.

In their first season, they had seven or eight employees, and Minshew says this season they have nine employees.

‘With another employee versus what we started in 2016, we’ve almost doubled our gross sales,” he says.

Minshew says they work hard to retain their employees as it helps with their efficiency when staff members already know how to care for specific properties.

“They know all the accounts, they know the customers by name, they know their kids, and their dogs,” he says. “They know when we can blow, when quiet time is and a lot of people like that kind of personal touch with the service.”

At Foxglove, Minshew says they’re creating a culture with their employees where they can be creative and proud of their work.

“This isn’t like a labor job to them,” Minshew says. “This is something that they’re proud of and they work hard to be proud of their work because what we do is distinctive.”

Minshew says the difference between a garden and a landscape is very nuanced.

“I think that a garden is created and cared for by a gardener that has a little bit more of an intimate connection with a space,” he says. “Landscapes are very common in our urban environment.”

He says when it comes to fine gardening work, they’re a horticulturist, a botanist and a designer all rolled into one as they carry out best practices and know how to troubleshoot problems all as artfully as they can.

Minshew encourages others interested in the fine gardening niche to find a mentor early on.

“There’s so much to learn,” Minshew says.

In Foxglove’s fleet, they use a number of older Toyota trucks that are distinctive with the company’s fox logo painted on them. Minshew says they don’t have their company number anywhere on their trucks and they don’t advertise a lot.

“We try to build this mystique or je ne sais quoi about ‘Who are those guys who drive around with the little fox on their trucks, I see those guys everywhere and I see them working in the most beautiful places. I’ve got to get a hold of these guys,’” Minshew says. “It weeds out a lot of riffraff. They have to find us.”

Minshew says they like when people have to find them as they often aren’t the type of customers just looking for another estimate.

A major focus at Foxglove is operational excellence. A philosophy they have adopted is the Japanese concept of ‘omotenashi’ which is to wholeheartedly look after guests. Minshew says he likes it because it’s different enough to make you curious. He says employees are more likely to listen about it rather than hearing the phrase customer service.

“It’s basically an eloquent definition of customer service by offering cheerful personal service touches to show that we really appreciate the customers and their business and being happy to personalize our service for them,” Minshew says. 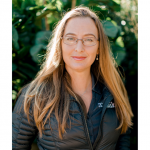 How I Do It: Being A Woman in A High-Intensity Position