Faces of the Industry: Hope Cooper - The Edge from the National Association of Landscape Professionals

Faces of the Industry: Hope Cooper

Hope Cooper, plant purchaser and nursery manager for Bella Terra Landscapes & Garden Center, based in Ellendale, Delaware, got into the industry in 1997.

“It was just something that I really enjoyed doing,” Cooper says. “I like being out there and getting my hands dirty and making new things.”

She continued to do both landscaping and bartending for a long time because the money was so good. Cooper says eventually she got to the point where she couldn’t work until two o’clock in the morning and then get up early in the morning to work at the nursery. In 2002, she started working for JB Landscaping, based in Lewes, Delaware.

“I was tickled pink that I could absolutely do what I love to do and make money with it,” Cooper says.

Cooper says her mentors include Patti Parsons, who helped her adjust to working at Frank J. Smith Nursery, as well as Frank Smith and his wife Isabel Smith. She says the Smiths were plant gurus.

“That’s how I learned my plants, I didn’t go to school or anything,” Cooper says. “It was just self-taught. I just made my hobby my career.”

Cooper says she enjoys meeting new people and being able to work outside. She says every day is an adventure.

“No doubt about it, getting up on those tractors and unloading in the skid steer and driving around and digging big holes and drilling, using the auger to plant plants,” Cooper says. “Driving the big things, that’s my favorite part.”

She says the biggest challenge has been earning respect from the guys.

“When I first started there weren’t very many women in the business at all and when I got up on a tractor they’re thinking that I’m not going to know what I’m doing,” Cooper says.

She says after sweating it out with them and doing what needs to be done, she’s earned their respect. Cooper says that over the years things have gotten better with more women in the industry. She encourages other women to give this industry a shot.

Cooper’s job responsibilities include all the ordering and purchasing for jobs and the garden center.

She says while they have a separate area for their staging from the retail area, sometimes customers still try to purchase the materials already set aside. Cooper also has to make sure the material is still looking good before it goes out to a job, as sometimes the plants may sit out longer than others.

Another issue Cooper has been dealing with is finding plants for her designers. She says it’s been a nightmare as of late. Even in December last year when they were trying to order plants for the season, things were already sold out.

“I tried buying cinnamon ferns and they told me they were sold out until the fall of 2022,” Cooper says. “It’s so hard to keep up with everything. With supply and demand, it’s like buying batteries in a hurricane.”

Cooper says if she could change anything about the industry she’d like a one-stop shop for plant material. Currently, she has to order from eight to 10 companies to get all the plant material she needs for jobs.

In five years, Cooper isn’t sure where she’ll be, but she does know she loves what she’s doing right now. 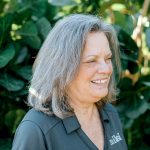 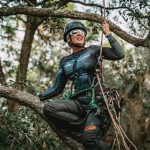 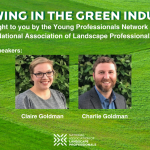 The Path of Working with Your Spouse: Season 2, Episode 43 of Growing in the Green Industry Podcast