2022 Judges' Award: Maintaining a Boxwood Lover’s Paradise - The Edge from the National Association of Landscape Professionals

When The LaurelRock Company, based in Wilton, Connecticut, took on the maintenance of an estate in Greenwich, Connecticut, in 2020, the plant health care was nonexistent and the multi-million-dollar landscape was in decline.

Two years later, their work on the property earned LaurelRock one of the two prestigious Judges’ Awards presented in 2022, which is selected from the highest scoring Gold Award winners of the Awards of Excellence.

“It was just a very surreal experience and an acknowledgment of the work that our crews do, which is really the big thing that now is my job to go back to them and really show the appreciation because they couldn’t be here, but they’re the ones that are really driving those results,” says Kevin Havey, new business manager for LaurelRock.

The estate was built in 1929, and the current ownership took over the property in the 1980s. The client reached out to LaurelRock directly. When LaurelRock visited the property, Havey says the infrastructure was there, but the plants were in a general state of decline.

“We were really able to connect with the client and share how passionate we were about something we had only seen for an hour, but really seeing the potential that was there and how we could help her recognize and bring out what was great about this property was really great,” Havey says.

This estate is a boxwood lover’s paradise with 4,800 linear feet of boxwood hedging that is pruned three times per season. Boxwoods are also located in two identical sunken parterre gardens, which the client calls the Love Gardens. Many of these hedges are shaped like hearts and create many pruning and watering challenges for the LaurelRock crew. The abundance of boxwoods also presented the challenge of preventing boxwood blight, leaf miners and psyllid from taking hold.

Havey says within two months of taking on the property, they identified boxwood blight. In response, they turned off all the irrigation as some plants were getting too wet. They were concerned they would lose entire portions of the landscape, but the client wasn’t ready to remove the boxwoods, so LaurelRock has been able to manage the fungal disease.

“Cultural practices were probably the biggest factor in it not spreading more aggressively,” Havey says. “Once we identified blight was on the property, monthly fungicide application with cultural practices, reducing water as much as we can, reducing the mulch load below the boxwoods, helped.”

Since then, crews sterilize their pruning tools throughout the day, conduct IPM inspections weekly, and pick up boxwood clippings with a handheld leaf vacuum.

Two different teams are on-site weekly. The weekly maintenance crew of three handles tasks such as mowing and raking. The multi-tiered nature of the property allows the crew to only use 30” walk-behind mowers that must be carried up and down the steps and through narrow gates.

“The unique part about that property is there’s very little lawn in for a large property like that,” Havey says. “We’re not mowing a lot. It’s probably it’s less than half an acre of lawn. We probably rake more gravel in the driveways than we do mow the lawn, which is interesting, but it makes such a visual impact when you have a 500-600 foot driveway, and it’s just all raked, and it’s these little details that we always stress to our crews.”

The gravel paths and drives make up 6,800 square feet and are cleaned and uniformly raked on a weekly basis with rakes and a hand-pulled dragnet. Havey says the homeowner is elated when she comes home and the drive has just been raked.

The fine gardening crew of three handles jobs like pruning. Both of these crews have an individual supervisor who helps the crews stay on top of their assigned tasks.

“What’s helpful is we’ve had the same people in the same roles now for three straight years, and so it’s a really cumulative effort,” Havey says. “It is very much the crews on site that are delivering the service and really helping things improve in terms of the health and look.”

LaurelRock’s fine gardening crew logs over 770 hours each season hand shearing and pruning over 2,000 square feet of vertical climbing ivy reaching up to three stories high, hundreds of shrubs and over one mile of formal hedges.

An allee of mature apple trees is pruned in late summer, while barberry hedging must be pruned on a bi-weekly basis to prevent an unkempt appearance. An 80-foot-long custom pergola wraps two sides of the courtyard and supports wisteria vines that require pruning every three weeks. The crew also keeps the Pachysandra neatly pruned along the 850 linear foot entry drive.

Havey says they budget out the tasks they need to achieve by a certain date. For instance, they work to ensure the Love Gardens are both pruned in the same week, so they look pristine together. 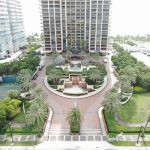 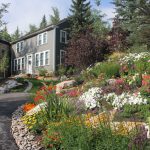