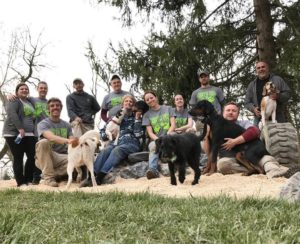 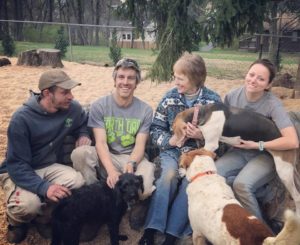 Last Fall I reached out to our client who is the founder of the Central Pennsylvania Animal Alliance to see if she knew of any ideal candidates for a community project for Earth Day 2018. From that email, we learned about Stephanie Grossnickel who has fostered over 700 dogs and puppies over the past 14 years for the Furry Friends Network animal rescue. Over the years, the dogs had taken their toll on her home and landscape.

A few Utopian Landscapes, LLC team members met with the President of both groups in January to figure out how we could pull this off as a surprise to Stephanie. Ultimately, we went “undercover” as Penn State Landscape Design students who were working on a class project together. After meeting with Stephanie, we could not imagine someone more deserving do a project for. Not only was she the kindest person we’d ever encountered, but we could see a lot of need for our services throughout her backyard. There were safety concerns, damaged trees, no grass, etc.

The scope the project continued to grow and we were getting nervous as to how we would pull this off. But after our second meeting with Stephanie we asked ourselves what else can we do for her? She is the type of person that makes you want to be a better person.

After months of planning, the Pawsome Backyard Makeover Earth Day 2018 project was finally a reality and we were amazed at how many volunteers and vendors came together to make the project happen. The volunteers were energetic and enthusiastic as they dug holes, planted trees, helped shift sod rolls, laid pavers, created tire steps and more.

Since the project was Earth Day weekend, we incorporated as much recycling and reusing of materials as we could. Tires were used to create safe steps and obstacles for the dogs. Pavers were laid on a permeable base. New, fast-growing trees were used as a privacy screen. Logs were used from their property to create terraces. 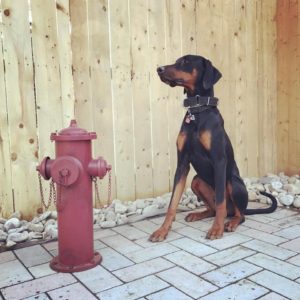 We installed an extra set of gates on her existing gates to make entering and exiting the yard a little easier.  If you’ve ever tried to leave a gated area where there are multiple dogs, you know it gets a little stressful ensuring none of them escape.

Since Stephanie often has potential adopters come out to meet dogs, we created a separate area for visitation which also doubles as a photo area so she can take better photos of adoptable dogs and puppies.

Stephanie works near her home. She thought she was meeting her daughter to go shopping, but when she arrived she was greeted by dozens of volunteers. Some were colleagues, students, friends or family but others were just there to thank her for her years of selfless dedication to rescue dogs.

She only made it a few steps before her eyes filled with tears and she realized what was going on. Over a week later, she says she feels like she’s still dreaming when she looks out at her new backyard. 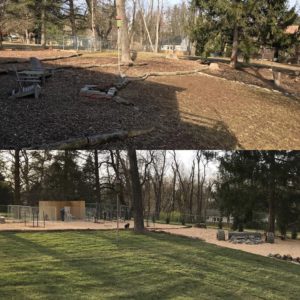 The project finished up around sunset on Saturday, April 21. The rescue dogs were introduced to their new backyard and their appreciation was obvious as they rolled on their new grass, chased each other through the obstacles and smelled the new surroundings.

The project was supported by local and national businesses, some of which included:

Share the story of your Earth Day or volunteer projects.  Send your story to lisa@landscapeprofessionals.org to be featured in Landscape Industry Essentials.

Behind the Scenes of Renewal & Remembrance

The landscape industry day of service made an impact