Our first virtual Legislative Days drew to a close on Friday afternoon, June 25, with over 130 meetings between elected officials and their staffs and NALP members. Conversations focused on supporting the recently introduced H-2B returning worker exemption bill, HR 3897 introduced by Rep. Henry Cuellar (D-TX) and by bipartisan co-sponsors. Staff members on the whole were very receptive to the reasonable and measured approach that HR 3897 takes and sounded their willingness to support if not add their office’s name to the list of co-sponsors.

“It was exhilarating to host a virtual Legislative Days event!” says Andrew Bray, VP of government relations for NALP. “I couldn’t be happier with the turnout, the messaging and the commitment by all the NALP members that participated in over 100 meetings the last two weeks. The timing couldn’t have been better as now we are reaching back out to many offices members met with to discuss both H-2B and climate change legislation that could be moving in the next few weeks.”

We conducted a total of 136 meetings with the delegation of 31 states and had 130 individuals participate during these past couple of weeks. A huge shout out and thank you to our sponsors for this event, FMC and Vermeer, and to the DCLRS team for helping us organize and conduct these meetings.

We kicked off week number two of this event with a meet-and-greet meeting with recently confirmed EPA assistant administrator Michal Freedhoff. Members of the NALP Board of Directors were joined by CEO Britt Wood in introducing Dr. Freedhoff to the lawn and landscape industry and emphasizing the critical role that our member companies play in mitigating climate change. We were also able to articulate our support for EPA’s Office of Pesticide Programs and the work that they do in regulating products and pledged to continuing our commitment as stakeholders.

Most of the meetings were held with congressional staffers who are focused on either immigration or environmental policy who then, in turn, report to their elected officials on the scope of our discussions. While we enjoy when one of our elected officials can join a meeting, it usually means that the discussion will be shorter in length and less in depth than a conversation with staff.

Even though this virtual fly-in was a great success, we missed being on Capitol Hill and having in-person meetings. We will be moving forward with planning our 2022 Legislative days in-person on Capitol Hill in February 2022. 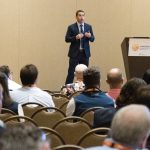 Bob Mann is the director of state and local government relations for NALP.