Landscapes of the Month: Restoring a Library Courtyard to Its Former Glory - The Edge from the National Association of Landscape Professionals

Home » Award Winning Projects » Landscapes of the Month: Restoring a Library Courtyard to Its Former Glory

Landscapes of the Month: Restoring a Library Courtyard to Its Former Glory

The Linda Hall Library, situated in Kansas City, Missouri, is one of the nation’s foremost libraries with a strong focus on science, technology, engineering, and their histories. The library sits atop an arboretum with employed horticulturalists to take care of the various plant species.

The client’s intent for this project was to transition from an aging courtyard into a gorgeous, functional outdoor space that can be used for the world’s most prestigious minds to share advanced theories regarding S.T.E.M. The client hired Hermes Landscaping, based in Lenexa, Kansas, to take on this ambitious project.

For their work on the project, Hermes Landscaping received a Gold Award in the 2021 Awards of Excellence.

“They came through a referral from a general contractor,” says Eric Soriano, LIC, a commercial division senior sales representative at Hermes Landscaping. “One of our customers asked us to approach the library about doing this work for them and we did; that started the whole design-build process.”

Despite the project’s successful outcome, it came with a multitude of challenges.

“The first thing we had to do is demolition work; demolish of the unsafe and unsuitable conditions,” says Soriano. “Then, we had to do some exploration; we delved into the substrate.”

More unsuitable conditions were found underneath the staircase. Red stone pavers were grouted with rubber silicone, so when the team had gotten under the staircase, the staircase pavers caved in. To fix it, Hermes hired a concrete contractor to rebuild the staircase. The staircase had to be repoured, creating a dangerous situation for team members; if they were to have stepped in the wrong place, they would have fallen directly through it.

When the team began working on the lighting fixtures, the electrical wires were rotted out. To solve this problem, the fixtures had to be rebuilt from scratch and wired back to the panel located inside the library. The old metal sconces were rotten as well, and the lights on either side of the courtyard were unusable. In place of the rotting light structures, an LED lighting system was installed to create an inviting outdoor courtyard area.

All of the previous plant material was torn up except for a ginkgo tree, which was eventually designed into the courtyard. Since the campus is an arboretum, the tree was retained and relocated in the wintertime when it lay dormant, and it’s still alive today. The existing, overgrown landscape was redesigned and replaced with a new landscape design, which could withstand the courtyard’s growing conditions.

The selection of the plant palette was specified by a landscape architect along with Hermes’ commercial division team.

When it came to solving each problem, Hermes hired the best of the best to ensure that each issue was dealt with properly.

Soriano stated that a complete and all-encompassing landscape plan was designed and then implemented to build a functional yet alluring courtyard space that included safe walking areas in all sections of the courtyard.

“We hired a Landscape Architect, Kelly VanElders, and asked him to use his vast talents to design a courtyard that was beautiful and functional,” Soriano says, “And we met with the customer multiple times to go through and find out what they wanted from the courtyard.”

The entirety of the process took about two years, with the largest amount of time being spent on the design aspect and receiving approvals.

Soriano also mentioned how the client allowed for the team to express themselves and emphasize the use of creativity to beautifully combine this project into a functional masterpiece.

“(The team) worked tirelessly with infinite patience, every color, every shape, every plant,” says Soriano.” We worked very hard to delight the decision makers on this project – not satisfy, delight. They got excited and delighted about the work that (we) did. It took a lot of dedication on the part of our team members.” 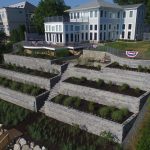 Landscapes of the Month: Overcoming Steep Slope Challenges by the Chesapeake Bay