Landscapes of the Month: Crafting a Modern Landscape in a Historic District - The Edge from the National Association of Landscape Professionals

Home » Award Winning Projects » Landscapes of the Month: Crafting a Modern Landscape in a Historic District

Landscapes of the Month: Crafting a Modern Landscape in a Historic District

A residence located in the small city of Roswell, Georgia, required a modern update while maintaining its historic ambiance. The clients relocated away from the suburbs to have better access to the amenities that an urban setting would provide, including an easy walk to the downtown restaurants and bars.

Scapes, based in Roswell, Georgia, was employed to undergo this ambitious project. Scapes constructed a private backyard oasis, which included the addition of an outdoor pool, hot tub, fireplace, open play area, and grilling station that would allow for consistent use throughout the year. Large evergreen trees were planted to maintain privacy, and an outdoor kitchen was installed to satisfy the owner’s passion for cooking and entertainment.

The project combined into a historical small-town setting, but not without setbacks. Danny Holt, the senior designer and project manager for Scapes, noted how the historical features of the town prevented the project from running smoothly.

“The location of the amenities needed careful foresight and planning to protect these historical trees that were critical to the town and our overall concept,” Holt says.

Holt also added how they faced issues when attempting to, and eventually succeeded in protecting critical root areas of surrounding mature trees and tight street access. Further care was needed for the drainage on a flat property; water had to flow from the site without negative impacts on the neighboring properties.

The owner entertains throughout the course of the year, so careful consideration was put into selecting plants that could endure all four seasons.

Rain was an issue when it came to maintaining the required erosion control measures to avoid a fine from the local municipality. Because of inclement weather, the driveway installation could not begin until the end of the project. However, setting the interfacing grades and elevations about six months before the driveway installation was crucial for a timely completion.

“With all the rains during the year-long construction, adhering to all local sediment control mandates was critical and successfully adhered to,” Holt says. “Setting of all the grades for the outdoor living area and pool beam was of vital importance since the finished floor elevation of the home was not constructed and set but just a planned point.”

Despite weather challenges, there were also parking concerns during construction.

“Parking space was very limited, and nearby business traffic flow needed to be maintained throughout the project,” Holt says. “This forced extra foresight and planning for our crews and all material deliveries.”

Scapes was able to address the challenges they faced regarding traffic control. Holt describes how they had to consistently think about and extensively communicate through the ups and downs of the job to ultimately be successful throughout project construction.

“Many of the privacy trees were planted prior to the home constructions so damage mitigation, irrigation, protection were all vital to start the project,” Holt says. “Establishing of the elevations and grades and adhering to them when ‘changes’ in the building process occur proved challenging.”

The ultimate trial was creating a landscape that fit the historical essence of Roswell in the front yard but provided modern amenities that fit the needs of the homeowner in the backyard. To produce this, Scapes installed a limestone curbing that matched the city’s general architecture concept but allowed for a more attractive appearance.

The homeowner had used Scapes for a previous project, which is why they were rehired for this one. The previous home that Scapes had worked on had a looser, more natural feel, which differs from the more modernized impression the owner wanted for this specific residence. Scapes did whatever they could to produce a landscape that would once again satisfy the owner’s needs and wants.

“It was important to all of us that this new home linked to the small historical town setting,” Holt says. 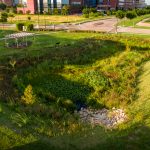 Photo: Bryan Malloch
Landscapes of the Month: Transforming a Parking Lot into a Retention Pond 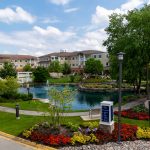 Photo: Thomas Walker
Landscapes of the Month: Restoring a Garden to Its Full Potential